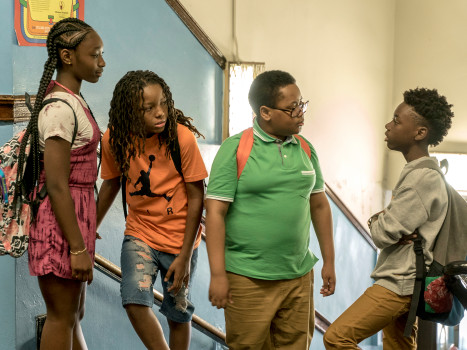 Mariah Gordon as Andrea, Michael Epps as Jake, Shamon Brown as Papa and Alex Hibbert as Kevin in THE CHI – Photo: Matt Dinerstein/SHOWTIME

Some familiar characters are returning to The Chi. Recently, Showtime announced stars Shamon Brown Jr., Barton Fitzpatrick, and Michael Epps have been promoted to series regulars for the TV show’s second season.

The drama follows a group of Chicagoans who, at first, are connected by circumstance, but begin to develop a bond due to their loneliness, thirst for atonement, and hunger for a more meaningful life. The cast includes Jason Mitchell, Tiffany Boone, Jacob Latimore, Yolonda Ross, Ntare Guma Mbaho Mwine, Alex R. Hibbert, Armando Riesco, Sonja Sohn, Jahking Guillory, and Steven Williams.

NEW YORK – July 23, 2018 – Fan favorites Shamon Brown Jr. (Papa), Barton Fitzpatrick (Reg) and Michael Epps (Jake) have been upped from guest stars to series regulars for the highly anticipated second season of THE CHI. The hit SHOWTIME drama series is currently in production in Chicago and will return to the network in 2019. THE CHI averaged 4.5 million weekly viewers across platforms and ranks as the highest-rated SHOWTIME freshman season since BILLIONS in 2016.

In season one, viewers watched as best friends Kevin (series regular Alex Hibbert), Papa (Brown Jr.) and Jake (Epps) navigated the rocky terrain of teen life on the South Side in their journey to become young men. In addition to normal adolescent pitfalls (girls, school hierarchies, bullies), they were also exposed to some of the darker elements of inner-city life, at times by Jake’s older brother and guardian, Reg (Fitzpatrick). Kevin and Papa battled Reg’s influence over Jake, praying that their friend would maintain his innocence and avoid temptations. But whether the boys are able to shield Jake from Reg’s twisted lessons in street survival remains to be seen.

Created and executive produced by Emmy(R) winner Lena Waithe (Master of None) and executive produced by Academy Award(R), Emmy and Golden Globe(R) winner Common (Selma), THE CHI explores the humanity behind the headlines sensationalizing the South Side of Chicago. Ayanna Floyd Davis (Empire, Hannibal) serves as executive producer and showrunner for season two. Produced entirely in its namesake city, THE CHI is a timely coming-of-age story centering on a group of residents who become linked by coincidence but bonded by the need for connection and redemption. The ensemble cast includes Jason Mitchell (Mudbound, Straight Outta Compton), Ntare Guma Mbaho Mwine (Queen of Katwe), Jacob Latimore (Sleight), Alex Hibbert (Moonlight), Tiffany Boone (The Following), Yolonda Ross (Treme, The Get Down) and Armando Riesco (Bull). In addition to Waithe, Common and Floyd Davis, Aaron Kaplan (Santa Clarita Diet, Divorce) also serves as an executive producer, along with Rick Famuyiwa (Dope), who also directed the pilot episode, and Derek Dudley and Shelby Stone of Freedom Road Productions. The series is produced by Fox 21 Television Studios. To learn more about THE CHI, visit SHO.com and follow on Twitter, Facebook and Instagram. Join the conversation using #TheChi.”

What do you think? Have you seen The Chi? Will you watch season two?

Love this show. I try to make sure I am home on Sunday evenings to catch it. Most of my friends watch as well. Love the Grandmother, glad she returned from the Hospital and that beat down. Love, Papa, and his homeys. Hope this stays on for a long time. Superb acting and real drama.!!