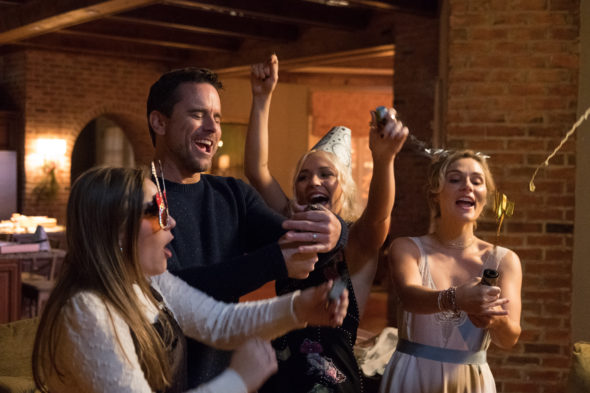 Does the sixth and final season of the Nashville TV show on CMT hit all the right notes? As we know, the Nielsen ratings typically play a big role in determining whether a TV show like Nashville is cancelled or renewed for season seven. Unfortunately, most of us do not live in Nielsen households. Because of that, many viewers are frustrated their viewing habits and opinions weren’t considered, before CMT decided to end Nashville with the sixth season. We care what you think, so we invite you to rate all of the Nashville season six episodes for us here.

What do you think? Which season six episodes of the Nashville TV series do you rate as pitch perfect, falling flat, or a little off key? Should CMT have cancelled or renewed CMT for a seventh season? Don’t forget to vote, and share your thoughts, below.

I love Nashville, one of my favorites. I love the music, have most all the songs downloaded. I never have time to watch it when it’s on, very thankful it’s on Hulu, main reason I pay for it. I just finished season 6. And had to get on to see if it was actually the last season. I am so disappointed/ upset right now. Not really sure if I need to keep Hulu anymore. If they are canceling it I really really really wish the actors would continue to do music and have their own albums. I loved their voices… Read more »

It is or was one of my favorite shows………I am really disappointed it has been cancelled.:(

Nashville is one of my favorite shows—EVER ! I miss Reyna, but still love the show. Please, please give it another season to tie up all million loose ends.

Love the Juliette/Darius storyline. Not sure she wld leave Cadence though. Also given Avery’s IQ, pretty sure he could see through the Becky Sharp character of Alannah & some of the dialogue between them sounds like a teenage girl’s mag! Finally, wouldn’t Daphne’s dad, Teddy be involved re her talent show? He is her legal guardian, not Deacon. Resolution?

WHEN YOU SHOW 5 OR SIX EPISODES OF A SHOW AND THEN IT’S NOT SHOWN FOR 3 OR 4 MONTHS , WHAT DO YOU EXPECT? i WAS WONDERING WHEN IT WAS COMING BACK ON. I SWITCHED CABLE COMPANY’S BECAUSE IT WASN’T IN MY PACKAGE AFTER IT WAS DROPPED. ME AND ALL MY FRIENDS LOVE THE SHOW NASHVILLE.