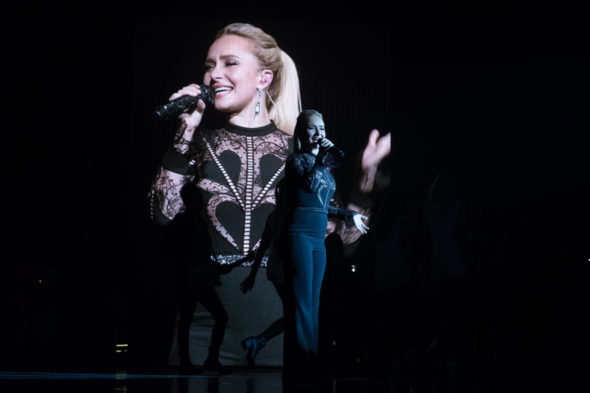 Will Juliette Barnes get an encore? Has the Nashville TV show been cancelled or renewed for a seventh season on CMT? The television vulture is watching for the latest cancellation and renewal news, so this page is the place to track the status of Nashville, season seven. Bookmark it, or subscribe for the latest updates. Remember, the television vulture is watching your shows. Are you?

The sixth season of Nashville averaged a 0.14 rating in the 18-49 demographic and 742,000 viewers. Compared to season five, that’s down by 24% in the demo and down by 9% in viewers. Find out how Nashville stacks up against the other CMT TV shows (though they’ve all been cancelled).

Because CMT announced it was ending ahead of time, fans don’t have to spend the sixth season wondering if CMT will cancel or renew Nashville for season seven. Since ABC cancelled it after four seasons, and Connie Britton left midway through the fifth, season six seems like a bit of a bonus — at least to this famished television vulture. Because I’m truly sorry for those fans who wish it would continue, I plan to treat seasons five and six as my dessert course. Still, I’ll keep an eye on the Nielsens and will also be on the lookout for any Nashville spin-off or sequel series news. Subscribe for free alerts, to stay up-to-date on Nashville TV series news.

What do you think? Did the Nashville TV show end at the right time? If it were your choice, would Nashville be cancelled or renewed for season seven on CMT?

Bring in back!!! I saw a trailer that made the suggestion that it will be back in 2021. True or false?!