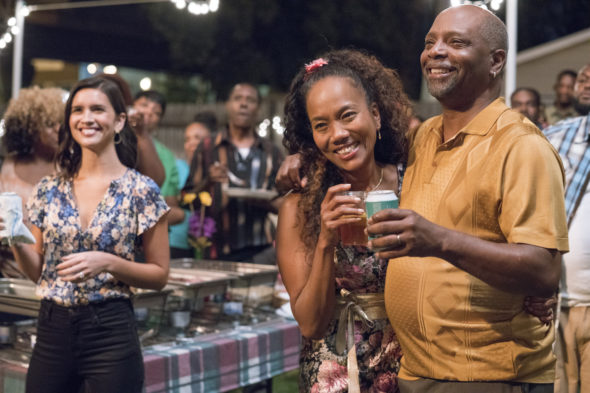 Showtime is heading back to the Windy City. Today, the network announced season two of The Chi will debut in April.

From executive producer Lena Waithe, the drama follows a group of Chicagoans who, at first, are connected by circumstance, but begin to develop a bond, due to their loneliness, thirst for atonement, and hunger for a more meaningful life. The cast includes Jason Mitchell, Tiffany Boone, Jacob Latimore, Yolonda Ross, Ntare Guma Mbaho Mwine, Alex R. Hibbert, Armando Riesco, Sonja Sohn, Jahking Guillory, and Steven Williams.

Season two of The Chi premieres on Showtime on April 7th at 10 p.m. ET/PT.

Produced entirely in its namesake city, season two of THE CHI will spotlight the ambitious plan by Brandon (Mitchell) to make his food truck a success, while navigating the class differences with his girlfriend Jerrika (Boone). Emmett (Latimore) will encounter a lot of bumps and bruises as he makes an effort to grow up and get custody of his son, guided by his mother Jada (Yolonda Ross), who is discovering a new life of her own. Kevin (Hibbert) reckons with the trauma of what he has experienced in his young life, as he strengthens the bonds with his buddies, Papa (Brown Jr.) and Jake (Epps), whose older brother Reg (Fitzpatrick) exposes Jake to twisted lessons in street survival. Lastly, an imprisoned Ronnie (Mwine) will attempt to come to terms with killing Brandon’s brother and reclaim his life, while Detective Cruz (Riesco) launches a new investigation. The season will also show the joys of living life on the Southside of Chicago. Guest stars include Carl Lumbly, Curtiss Cook, Crystal Dickinson and Kimberly Hebert Gregory.

What do you think? Have you seen The Chi? Will you watch season two?