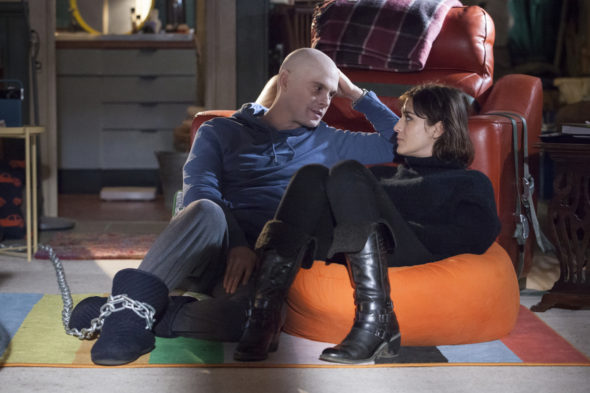 Has Charlie finally had it with Joel and Tess? Is the Ill Behaviour TV show cancelled or renewed for a second season on Showtime? The television vulture is watching all the latest cancellation and renewal news, so this page is the place to track the status of Ill Behaviour, season two. Bookmark it, or subscribe for the latest updates. Remember, the television vulture is watching your shows. Are you?

The ratings for this series were very low. That’s not unusual for a Showtime series but Ill Behaviour originated on BBC Two. The BBC would have to commission a second series (i.e. season), first. Generally speaking, the Brits seem to be a bit more relaxed about ordering subsequent seasons of their TV programs. Compared to the way in which things are done on this side of the pond, it sometimes feels as though they view television as an art form rather than a business model. Fancy that! I’ll remove my tongue from my cheek and update this page with breaking developments. I’m not expecting a second season. Subscribe for free alerts on any Ill Behaviour cancellation or renewal news.

What do you think? Do you hope the Ill Behaviour TV show will be renewed for a second season? How would you feel if Showtime cancelled this TV series, instead?

Please bring this show back with the same characters for a second season!