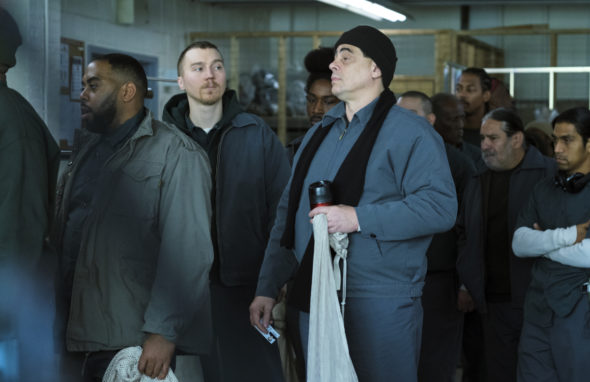 TV show description:
From creators Brett Johnson and Michael Tolkin, and director Ben Stiller, the Escape at Dannemora TV show is based on a 2015 real-life prison break from the Clinton Correctional Facility, in the village of Dannemora, New York. The events surrounding the escape, and ensuing manhunt, received a lot of media attention at the time. Some of its notoriety was due to the involvement of a married female prison employee, who was alleged to have had affairs with both of the convicted murderers involved and helped them mount their escape.

The brains behind the break, Richard Matt (Del Toro) is a self-taught artist, with a knack for painting portraits of celebrities including Julia Roberts, Hillary Clinton, and Barack Obama. Don’t mistake his talent for gentility. Matt has been known to strike terror in the hearts of the other inmates. When this believer in the power of positive thinking notices a place hidden behind his cell, he realizes it presents a route to freedom.

Matt met his co-conspirator, David Sweat (Dano), when they were living in the same prison block. Mechanically inclined, Sweat prefers to spend his time repairing items like headphones, or quietly reading, to playing cards and mixing with his fellow prisoners. Beneath his aloof exterior lurks a truly dark streak, however. Prone to violent explosions of rage, he is counting on his only friend’s plan to find the peace and quiet for which he longs.

Colloquially known as Dannemora, Clinton is New York state’s largest maximum-security facility. It’s also its third-oldest prison, but until now, no one has ever escaped. There are a number of factors working in Richard and David’s favor, including inept management and oversight, as well as a “culture of carelessness” which could be called criminal.

The biggest boost to the duo’s plot is Joyce “Tilly” Mitchell (Arquette), a wife and mother who is employed as an inmate supervisor in the prison’s tailor shop. As she gets involved with Richard and David, and helps them with their plan, it grows to include the murder of her husband, Lyle (Lange).

After the jailbirds make their break, the chase is on, and will grow to include even the US Border Patrol.

What do you think? Do you like the Escape at Dannemora TV series? Should this Showtime TV show be cancelled or renewed for another season?

Escape at D should be renewed.