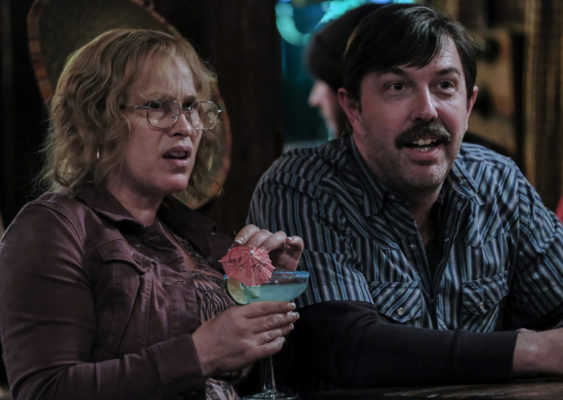 Can Richard and David stay on the outside on the Escape at Dannemora TV show on Showtime? As we all know, the Nielsen ratings typically play a big role in determining whether a TV show like Escape at Dannemora is cancelled or renewed for season two. Unfortunately, most of us do not live in Nielsen households. Because many viewers feel frustration when their viewing habits and opinions aren’t considered, we’d like to offer you the chance to rate all of the season one episodes of Escape at Dannemora below.

A Showtime crime drama, the Escape at Dannemora TV show stars Benicio Del Toro, Patricia Arquette, Paul Dano, Eric Lange, Bonnie Hunt, and David Morse. It is based on a 2015 real-life prison break from the Clinton Correctional Facility, in the village of Dannemora, New York. Richard Matt (Del Toro) is a self-taught artist, with a knack for painting portraits of celebrities. Matt’s co-conspirator, David Sweat (Dano), prefers to spend his time quietly but, beneath his aloof exterior, lurks a truly dark streak. There are a number of factors working in Richard and David’s favor, including inept management and oversight. The biggest boost to the duo’s plot to escape is Joyce “Tilly” Mitchell (Arquette), a wife and mother who is employed as an inmate supervisor in the prison’s tailor shop.

What do you think? Which season one episodes of the Escape at Dannemora TV series do you rate as wonderful, terrible, or somewhere between? Should Showtime cancel or renew Escape at Dannemora for a second season, possibly with different characters? Don’t forget to vote, and share your thoughts, below.