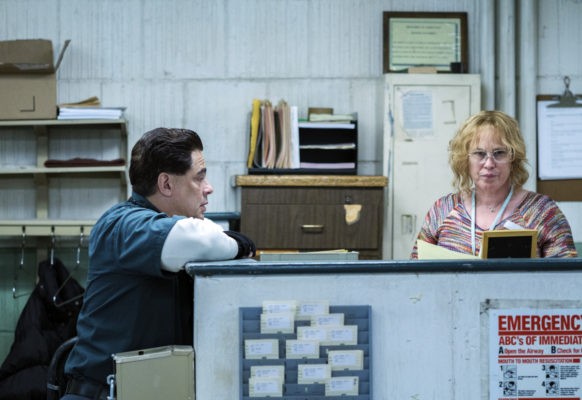 Are Richard Matt and David Sweat home free? Has the Escape at Dannemora TV show been cancelled or renewed for a second season on Showtime? The television vulture is watching all the latest cancellation and renewal news, so this page is the place to track the status of Escape at Dannemora, season two. Bookmark it, or subscribe for the latest updates. Remember, the television vulture is watching your shows. Are you?

A Showtime crime drama, Escape at Dannemora stars Benicio Del Toro, Patricia Arquette, Paul Dano, Eric Lange, Bonnie Hunt, and David Morse. It is based on a 2015 real-life prison break from the Clinton Correctional Facility, in the village of Dannemora, New York. Richard Matt (Del Toro) is a self-taught artist, with a knack for painting portraits of celebrities. Matt’s co-conspirator, David Sweat (Dano), prefers to spend his time quietly but, beneath his aloof exterior, lurks a truly dark streak. There are a number of factors working in Richard and David’s favor, including inept management and oversight. The biggest boost to the duo’s plot to escape is Joyce “Tilly” Mitchell (Arquette), a wife and mother who is employed as an inmate supervisor in the prison’s tailor shop.

Will Showtime cancel or renew Escape at Dannemora for season two? The ratings weren’t very good initially but then, they started climbing. This feels like a one-and-done series so I suspect there won’t be a second season but, these days, you never know. They could bring it back with a new cast and story. I’ll update this page with breaking developments. Subscribe for free Escape at Dannemora cancellation and renewal alerts.

What do you think? Do you hope the Escape at Dannemora TV show will be renewed for a second season? How would you feel if Showtime cancelled this TV series, instead?

I loved the show escape at dannemora

Yes! Please do a second season. The characters and the locale are so rich and full of character. There are so many possibilities here. Please make it return for a season 2! I am savoring every episode because I know there are so few! P

I loved it should be back for 2nd season

I look forward to Sunday night, I have to say I’ve totally enjoyed Escape at Dannemora, and I truly hope that we see a season 2. I was so into it, I actually purchased a book on the subject, and Ben Stiller did a great job Directing. Please don’t cancel!!!! I’m a big fan of Benicio Del Toro, love Patricia Arquette, and totally enjoyed Paul Dano. Again… Please, finish the story, let us have a season 2!!!!

I am really liking the show and I love the cast,I hope it is renewed for a second season,it seems like everytime we start watching a show and like it either ends or doesn’t renew,I really hope it’s not the case with this show fingers crossed
For a second season