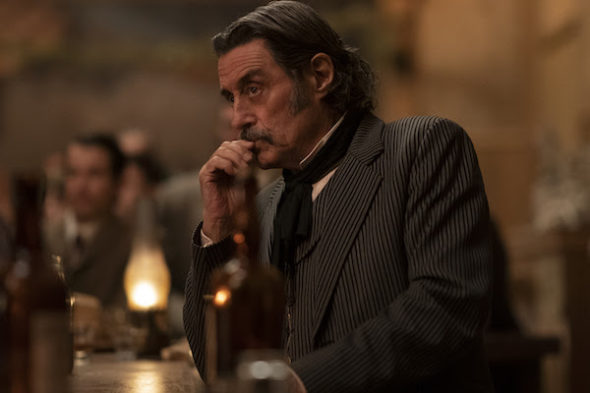 “This town is a sanctuary.” HBO just released the premiere date and a new teaser for their upcoming Deadwood movie.

HBO‘s Deadwood film debuts on May 31st at 8 p.m. ET/PT. As IndieWire reports, the movie premieres on the last day 2019 Emmy eligibility. Deadwood earned 28 Emmy nominations and eight wins during its original run.

You can take a first look and read more info about the film below:

In this original movie based on David Milch’s acclaimed, Emmy®-winning HBO series of the same name which debuted 15 years ago today, the indelible characters of the show are reunited after a decade to celebrate South Dakota’s statehood. Former rivalries are reignited, alliances are tested and old wounds reopened as all are left to navigate the inevitable changes that modernity and time have wrought.

During its three-season, 36-episode run on HBO from 2004 to 2006, the “Deadwood” series was nominated for 28 Primetime Emmy® Awards, winning eight, including Outstanding Directing for a Drama Series (Walter Hill). The series also received a Golden Globe Award for Best Performer by an Actor in a Television Series – Drama (Ian McShane).

Bucket list complete. I was heartbroken and angry when HBO cancelled Deadwood. The lame reasons afterwards made it even worse. This has been long wanted and waited for, I’m so excited that it’s almost here!