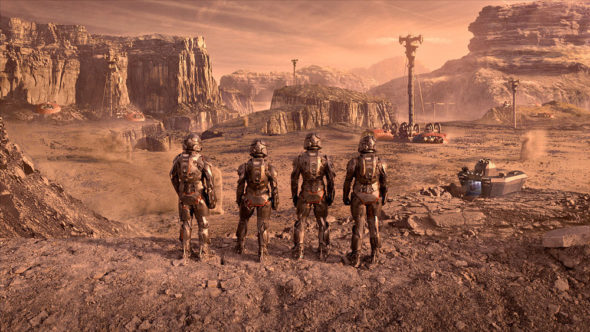 Last year, after The Expanse had been cancelled by Syfy, Amazon saved the series and ordered a fourth season. A week ago, Amazon revealed the season four would debut on Friday, December 13th of this year — fufilling an earlier announcement that the series would return in 2019.

Today, Amazon released a fourth season teaser and revealed that The Expanse had already been renewed for a fifth season.

Check out information about the upcoming fourth season, below:

About The Expanse Season 4:
Season 4 of The Expanse, its first as a global Amazon Original, begins a new chapter for the series with the crew of the Rocinante on a mission from the U.N. to explore new worlds beyond the Ring Gate. Humanity has been given access to thousands of Earth-like planets which has created a land rush and furthered tensions between the opposing nations of Earth, Mars and the Belt. Ilus is the first of these planets, one rich with natural resources but also marked by the ruins of a long dead alien civilization. While Earthers, Martians and Belters maneuver to colonize Ilus and its natural resources, these early explorers don’t understand this new world and are unaware of the larger dangers that await them.

About Prime Video:
Want to watch it now? We’ve got it. This week’s newest movies, last night’s TV shows, classic favorites, and more are available to stream instantly, plus all your videos are stored in Your Video Library. Over 150,000 movies and TV episodes, including thousands for Amazon Prime members at no additional cost.

What do you think? Are you a fan of The Expanse TV show? Will you be watching season four on Amazon? Are you glad that the series has already been renewed for season five?

Love the show, and glad someone picked it up.
Will watch it on Amazon, unless they charge to view it beyond the cost of being an Amazon Prime member, as they do for many shows.