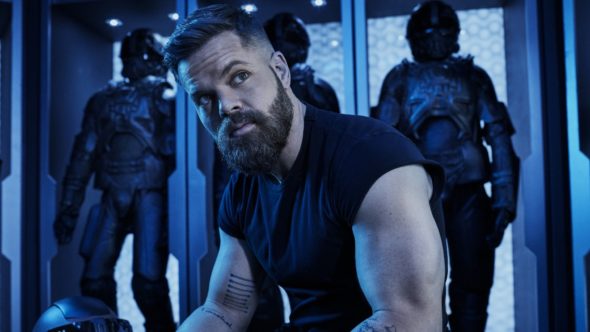 It was announced today that The Expanse TV series will return in December. The Amazon Prime Video series fifth season will kick off with a trio of new episodes on Wednesday, December 16th. Additional installments will be released each Wednesday, culminating in the season finale on February 3rd.

Season five of the sci-fi series resumes “as multitudes of humans leave the solar system in search of new homes and vast fortunes on the earth-like worlds beyond the alien Ring.”

The announcement was made today at New York Comic Con’s Metaverse. You can check out the panel discussion about The Expanse, as well as a trailer and press release, below.

CULVER CITY, Calif. – October 8, 2020 – Season five of The Expanse will premiere Wednesday, Dec. 16, on Amazon Prime Video, with the official trailer out now. The announcement was made today during the series’ panel at New York Comic Con’s Metaverse, which is now available to stream on the NYCC YouTube channel. The first three episodes of season five will premiere Dec. 16, with new episodes available each Wednesday following, culminating in an epic season finale on February 3, 2021. The ten-episode Amazon Original series will be available exclusively on Prime Video in more than 240 territories around the world, and is produced by Alcon Television Group.

Season five of the series picks up as multitudes of humans leave the solar system in search of new homes and vast fortunes on the earth-like worlds beyond the alien Ring, and a heavy price for centuries of exploitation of the Belt finally comes due and a reckoning is at hand. For the crew of the Rocinante and the leaders of the Inner Planets and the Belt, the past and present converge, bringing forth personal challenges that have wide-reaching repercussions throughout the Solar System. Amos (Wes Chatham) returns to Earth to confront his past and the legacy of the life he fought to leave behind. Naomi (Dominique Tipper) reaches out to her estranged son in a desperate bid to save him from his father’s toxic influence. Bobbie (Frankie Adams) and Alex (Cas Anvar) confront the collapse of Mars as they chase a shadowy cabal with ties to terrorists and criminals. Holden (Steven Strait) wrestles with the consequences of his own past with the Protomolecule, the aliens who built it, and the mystery of what killed them. Drummer (Cara Gee), with a new crew, fights to escape who and what she used to be. And Avasarala (Shohreh Aghdashloo), refusing to be relegated to the sidelines, fights to prevent a terrorist attack unrivaled in history.

About The Expanse:
The Expanse, set in a colonized solar system, begins with the governments of Earth, Mars and the Asteroid Belt locked in long-standing conflict. The crew of the Rocinante – an illegally salvaged warship – stumbles on a vast conspiracy and a mysterious alien technology that threatens to upend the balance of power and the fate of humanity. The Expanse is a high-action, realistic sci-fi adventure that broadens the vision of humanity’s path in the future as well as a deeply-felt examination of the most critical, raw, and pressing issues of today.

What do you think? Are you a fan of The Expanse TV show? Are you looking forward to watching the fifth season?

Oh joy, oh bliss my favourite show is back! I love The Expanse so much I can’t tell you. If you don’t already watch then you should check it out. It’s one of the few shows my husband and I BOTH look forward to viewing.

Cant wait! Favorite show (except for The Last Kingdom on Netflix). So glad its returning so soon!

Excited to hear season 5 is scheduled to continue. Super fan here and can’t wait to see what is in store for them on the other side of the ring.

Love “The Expanse” but haven’t seen it since it moved to Amazon Prime. Fixed income doesn’t budget for extras like that.

Cannot wait! If you’re an SF fan and not watching The Expanse, you are missing out!