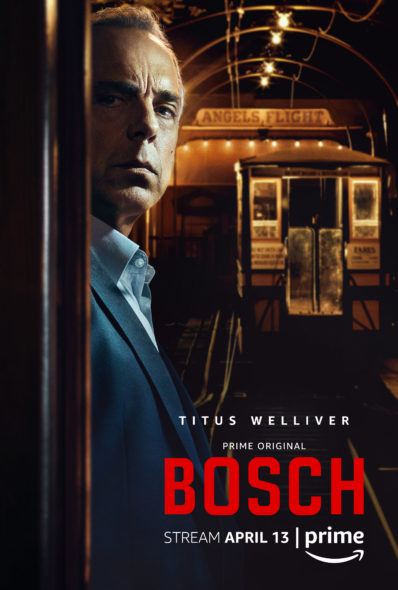 Harry Bosch is coming back in a big way. Amazon has renewed its Bosch TV show for a fifth season. In addition to the season five renewal, they’ve also announced, Bosch, season four, debuts on Amazon on Friday, April 13, 2018. Check out the new key art poster (above) and the official trailer, below. The series is free to stream for Amazon Prime members. Purchase an Amazon Prime subscription, here (affiliate link).

Watch the new Bosch trailer for the fourth season.

Check out the Amazon press release on Bosch.

SEATTLE—Feb. 13, 2018—(NASDAQ: AMZN)—Amazon today announced it has greenlit a fifth season of the longest-running one-hour Prime Original Bosch. Executive Producers Eric Overmyer and Daniel Pyne are slated to team up as co-showrunners. Season four of the Emmy-nominated series will premiere exclusively on Amazon Prime Video on Friday, April 13. Bosch is produced by Fabrik Entertainment, a Red Arrow Studios company.

Based on Michael Connelly’s best-selling novels, the hour-long series Bosch stars Titus Welliver (Lost) as homicide Detective Harry Bosch, Jamie Hector (The Wire) as Jerry Edgar, Amy Aquino (Being Human) as Lt. Grace Billets, Madison Lintz (The Walking Dead) as Maddie Bosch and Lance Reddick (The Wire) as Deputy Chief Irvin Irving. In the ten-episode season four, when an attorney is murdered on the eve of his civil rights trial against the LAPD, Bosch is assigned to lead a task force to solve the crime before the city erupts in a riot. Bosch must pursue every lead, even if it turns the spotlight back on his own department. One murder intertwines with another, and Bosch must reconcile his past to find a justice that has long eluded him.

Season three has an average customer rating of 4.8, with 89% 5 star reviews. Here’s what customers have been saying:

“As Amazon Prime Video’s longest-running one-hour series, Bosch has long been a cornerstone of our scripted programming, and Prime members consistently clamor for more,” said Sharon Tal Yguado, Head of Scripted Series, Amazon Studios. “We are excited to give them another season with Harry Bosch, Jerry Edgar, Grace Billets and the rest of the diverse characters that make up the Bosch universe.”

“I could not be prouder of the show we are making. Bosch is entertaining and relevant to our world today,” added Connelly. “On top of that we have a fantastic writing staff and the cast and crew are the best. We feel we are just hitting our stride. Season four is based on “Angels Flight” and I don’t think we could have chosen a more timely story to tell.”

“Producing Bosch for Amazon Prime Video has been an honor and a delight,” said Fabrik Entertainment CEO Henrik Bastin, who also executive produces the series. “Sharon Tal Yguado and her entire team have shown incredible support in the creative process and we couldn’t be more pleased to debut season four this coming April and then to dive back into production on season five with Eric and Dan leading the team as co-showrunners.”

Henrik Pabst, President of Red Arrow Studios International, the TV distribution arm of Red Arrow Studios, said, “It’s fantastic news that Bosch will be back for season five. Amazon Prime Video’s longest-running drama is a huge hit internationally, and Bosch fans around the world will be delighted by the news.”

Prime members can stream seasons one, two and three of Bosch exclusively via the Prime Video app for TVs, connected devices including Fire TV, mobile devices and online at www.amazon.com/boschtv. Members can also download the series to mobile devices for offline viewing at no additional cost to their membership. The series is a global release and available on PrimeVideo.com for Prime Video members in more than 200 countries and territories.

Customers who are not already Prime members can sign up for a free trial at www.amazon.com/prime. For a list of all Prime Video compatible devices, visit www.amazon.com/howtostream.

Check out all of our Bosch TV show news.

What do you think? Are you a fan of the Bosch TV series? Do you plan to check out seasons four and five on Amazon? Let us know, below.

My favorite Amazon show! I love all the characters. The best part is no damn commercials