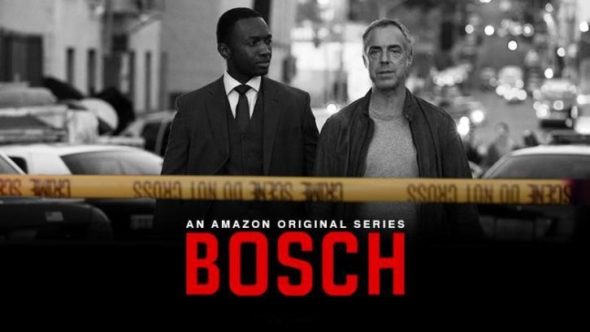 Bosch will have a new man in charge for its third season. Daniel Pyne is adding showrunner responsibilities to his job title. He has been an executive producer on the series.

John Mankiewicz will also join the staff of the Amazon series as an executive producer. Amazon released a press statement detailing the changes. Check that out below.

Joining Bosch as an Executive Producer is John Mankiewicz (House of Cards, House), a frequent collaborator of Pyne’s.

Among Pyne’s film credits are The Manchurian Candidate, Pacific Heights, Sum of All Fears, and Fracture. He made his directorial debut with the indie cult film Where’s Marlowe?, which he co-wrote with Mankiewicz. Together, they also created and produced The Street, a syndicated police procedural starring Stanley Tucci, and The Marshal. Pyne’s television work includes Alcatraz and Miami Vice, on which he and Mankiewicz first worked together. Pyne’s new novel, Catalina Eddy, will be released in March.

Mankiewicz is a screen and television writer who has served as an Executive Producer on House of Cards for the last four seasons. His credits include Miami Vice, Tales From The Crypt and The Mentalist. As a journalist, he has written for Rolling Stone, Esquire and, most recently The New Yorker. His screenplay adaptation of Joyce Carol Oates’ novella Rape: A Love Story, starring Nicolas Cage, will be released in 2017.

Based on the best-selling Michael Connelly novels, Bosch is currently in production on season three, and recently announced a fourth season pickup. Seasons one and two of the popular drama are now available exclusively on Amazon Prime Video in the US, UK, Germany, Austria and Japan via the Amazon Video app for TVs, connected devices including Fire TV, mobile devices and online at http://amazon.com/boschtv. Seasons one and two are also available on Prime Video in more than 200 countries and territories via the Prime Video app or online at www.PrimeVideo.com. Bosch is produced by Fabrik Entertainment, a Red Arrow Entertainment Group company. Season three is currently in production and slated to premiere in 2017.

Bosch was developed for television by Eric Overmyer (Treme, The Wire, Homicide: Life on the Streets) and is executive produced by Overmyer, Henrik Bastin (The 100 Code, American Odyssey, The Comedians) from Fabrik Entertainment, Pieter Jan Brugge (Heat, The Insider, The Clearing), Pyne, Mankiewicz and Connelly. Welliver also serves as Producer.

Are you a fan of Bosch? Are you excited to see the third season? Tell us what you think.

I absolutely love Bosch…please keep this show for many seasons!!

Yay! For a 3&4 th season of Bosch. Love to binge watch. Great cast and story line. So glad I have Amazon Prime,

So glad to hear Season 3 is in the works and that there will be a Season 4. Great show. Great cast.