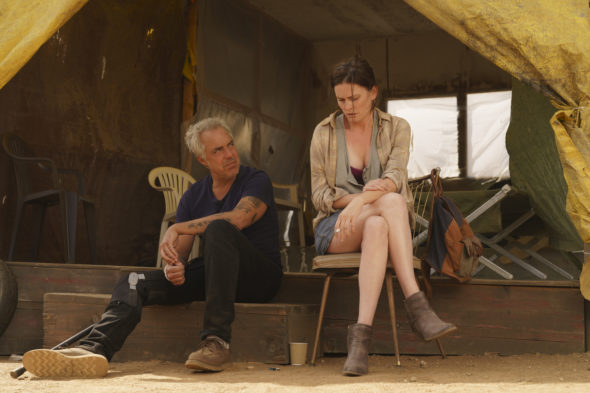 Is this the end of the line for Harry Bosch? Has the Bosch TV show been cancelled or renewed for a sixth season on Amazon? The television vulture is watching all the latest TV cancellation and renewal news, so this page is the place to track the status of Bosch, season six. Bookmark it, or subscribe for the latest updates. Remember, the television vulture is watching your shows. Are you?

An Amazon detective drama, Bosch stars Titus Welliver, Jamie Hector, Amy Aquino, Madison Lintz, and Lance Reddick. Based on the Michael Connelly book series, the Bosch TV show follows dogged Detective Hieronymus ‘Harry’ Bosch (Welliver), of the LAPD’s Hollywood Homicide Division. Although something of a rebel, this military veteran who served in both Iraq and Afghanistan, knows the rules and when to break them. The son of a murdered prostitute, Bosch is always seeking justice, despite the imperfect system of which he is a part.

Don’t spend your time wondering whether Amazon will cancel or renew Bosch for season six. They picked up the sixth season, five months ahead of the season five debut. What we don’t know is whether this is for a “sixth and final season” or if there is more Bosch to come. For now, I’ll keep an eye on the trades and update this page with breaking developments. Subscribe for free Bosch cancellation or renewal alerts.

What do you think? Do you think the Bosch TV show would be renewed for a sixth season? How would you feel if Amazon had cancelled this TV series, instead?

I love Michael Connellys books and was excited when I got my Amazon Prime Video app. Can’t wait for the last (sob, sob) season.

Best series I’ve ever seen – I guess that’s a good reason to cancel it. Has anybody at Amazon actually watched the program. That’s what I thought. FYI: it’s a sophisticated intellectual cops and robber mystery with characters that are interesting and actors that actually have talent and writers that also have talent- yep another couple of reasons to cancel it. If you could please forward whatever release to me I would be more than happy to pick of the production rights to the series if those are the right words. I in all honesty can’t believe this series is… Read more »

Most big TV networks, excepting Prime Video and Netflix, end up cancelling shows because there is too much time in between seasons. By the start of the next season, we either forgot the previous seasons or have moved on to another network. In my opinion, there should not be more than 3 months in between seasons.

Without a doubt, one of the best shows produced and filmed in America today. Season 5 was the best yet. Thank you so much for continuing the stories of Detective Harry Bosch and his partner Jerry! Titus Welliver brings the Michael Connolly Bosch character to life as I envisioned him when reading them. Prime is worth it just for this show!

Please keep the series going. There is so little TV worth watching.

Love this show, and with the Covid-19 virus there just isn’t that much interesting on TV. I binged on this, and was so sad when I got to the last episode.