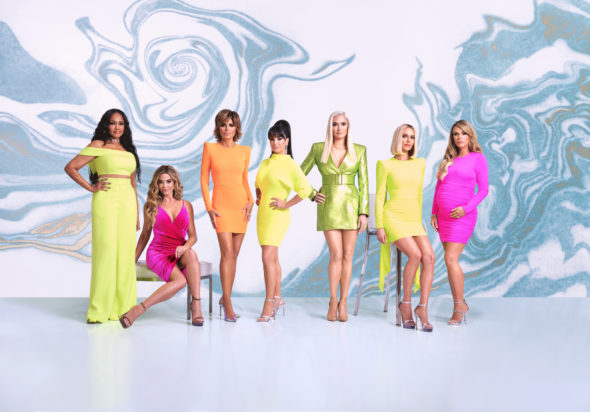 Time to get ready for a new season of The Real Housewives of Beverly Hills! Bravo has announced the return date for the reality series, and it will return in April. This season, viewers will see Kyle Richards, Lisa Rinna, Erika Girardi, Dorit Kemsley, Teddi Mellencamp Arroyave, and Denise Richards. Garcelle Beauvais is also joining the cast.

Bravo revealed the following about the new season in a press release:

“As the ladies attempt to manage the challenges of work-life balance and continue to travel the globe in style, they are forced to navigate ever-changing dynamics within the group. While new friendships are formed and old bonds are strengthened, some relationships are left to crumble.

Beverly Hills mainstay Kyle Richards finds herself busier than ever, juggling between time well-spent with her family and mounting work demands. Determined to dive back into her acting career and launch a new clothing line, she questions whether she can truly have it all.

Now an empty-nester, Lisa Rinna must deal with unexpected circumstances around her daughters’ independence while simultaneously supervising their modeling careers.

Dorit Kemsley may have bitten off more than she can chew with a new house, an expanding swimwear line, and new business venture that finds her redesigning the interior of an existing restaurant.

Meanwhile, Erika Girardi basks in the glory of her rising career when she tackles her biggest project yet: starring in a Broadway musical. Having cemented a place for herself among loyal dance club fans, Erika wonders whether they will follow her to a more mainstream gig.

Teddi Mellencamp Arroyave is growing in more ways than one. Managing a booming business while being present for her family, the always-in-control accountability coach adjusts to yet another added pressure – that of being pregnant with baby number three.

Denise Richards enjoys the best of both worlds after landing a dream job that allows her to spend quality time at home with her three daughters and new husband. When a familiar friend and a shocking rumor cause the women to question her, Denise is left to defend herself.

A busy single mother who also happens to be an in-demand actress in Hollywood alongside her long-time friend Denise, Garcelle Beauvais quickly finds a place for herself amongst the ladies. Confident and unapologetic, she is not afraid to speak her mind even if it means ruffling a few diamonds along the way.

Lisa’s friend and socialite, Sutton Stracke, is newly-divorced and opening a high-end boutique in town. Though the ladies appreciate Sutton’s unique style, her outspoken and quirky personality might be more than they can handle.”

Check out a trailer for the new season of The Real Housewives of Beverly Hills below. The series returns April 15.

Bravo should definitely think about JOSIAH as the new Chief Stew for BELOW DECK ” MED”….. The guy was a fabulous and funny second stew. They need some humor on that show. I love the fact that not only is he gay, but a man and they need that on that show. It’s only fair. Maybe Captain Sandy will not be so micro managing him as she does every other aspect of the boat….What is her problem????? If he is not up for that show, then definitely Below Deck. This guy Josiah was wonderful and so talented. Bravo, please think… Read more »

Chief stew……JOSIAH Please!!!!!! for either show