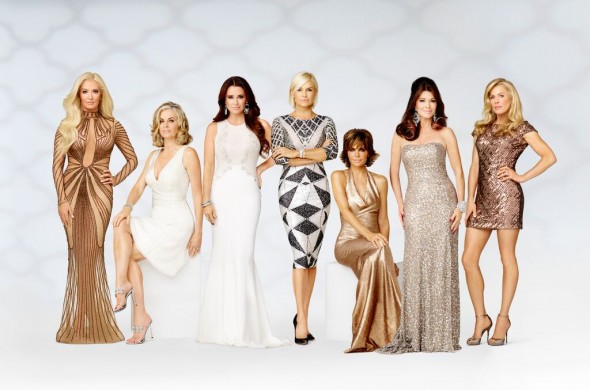 Bravo is back in Beverly Hills. Today, the network announced the premiere date and new cast members for season eight of The Real Housewives of Beverly Hills.

Season eight of The Real Housewives of Beverly Hills premieres on Bravo on December 19th at 9 p.m. ET/PT.

NEW YORK – November 16, 2017 – La La Land shines bright when Bravo Media’s “The Real Housewives of Beverly Hills” returns for season eight on Tuesday, December 19 at 9pm ET/PT. Erika Girardi, Dorit Kemsley, Kyle Richards, Lisa Rinna, and Lisa Vanderpump are joined by new housewife Teddi Mellencamp Arroyave and friend Camille Grammer for a season of lavish adventures, uncontrollable laugher and confrontations aplenty. Running her successful fitness and nutrition accountability business, newcomer Teddi moves through life with a strict ethos that she rarely strays from, even if this leads to differing opinions with some of the ladies. Friendly face Camille returns with a new outlook on life and is finally able to entertain the idea of remarrying, but when she struggles to get her “sexy” back, she turns to her friend Lisa Rinna for advice.

This season, the ladies are busier than ever, juggling life at home and in the boardroom. In addition to wrapping production on her series “American Woman” and expanding her retail business, Kyle is at a crossroad when she has to decide whether to renovate or move out of the home where she’s raised her daughters. Dorit gives herself just a couple months to re-launch her swimwear line, which proves to be a nearly impossible task. Erika pours herself into Erika Jayne’s meteoric rise, back in the recording studio and opening up in shocking ways as she writes her autobiography. Meanwhile, Lisa Rinna is a focused “momager” to her two model daughters, who are poised to be the next “it” girls, but struggles to keep them grounded as they continue to travel the world and grow up very fast. Lisa Vanderpump is knee-deep in rescue dogs, as her new business, Vanderpump Dogs, continues to thrive, but will she be able to do it all once she also takes on editor of a magazine? From casual lunches to luxurious escapades, there’s no doubt that living this large has its ups and downs, but these housewives have their famed zip code – and then some – in the palms of their hands.

Season seven of “The Real Housewives of Beverly Hills” was the most watched season of the series with 3.1 MM total viewers, according to Nielsen L7 data.

What do you think? Are you a fan of The Real Housewives of Beverly Hills? Are you excited for the new season?

Very excited! My mom and I will be watching! Love lisa vanderpump!