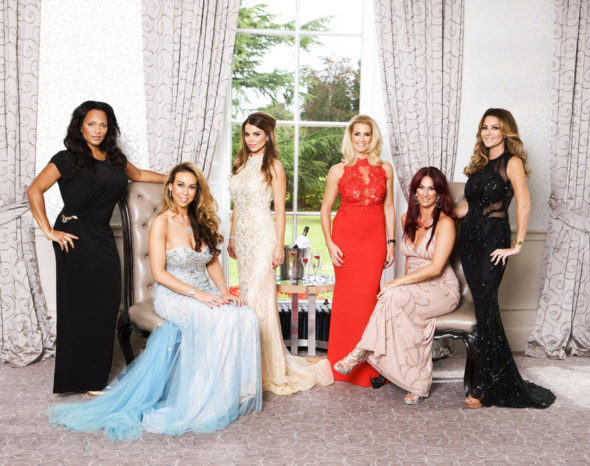 Bravo premieres The Real Housewives of Cheshire, Saturday, November 14, 2015 at 12:00pm ET/PT. The series showcases the wealth of the picturesque Northwest England county of Cheshire — its expensive homes and famous residents.

BRAVO MEDIA HOPS ACROSS THE POND WITH THE ACQUISITION OF “THE REAL HOUSEWIVES OF CHESHIRE” PREMIERING SATURDAY, NOVEMBER 14 at 12PM ET/PT

In Cheshire, a county in Northwest England, there are only two ways to move: up or out. Nicknamed the “Golden Triangle,” it is known for its expensive homes, famous residents and spectacular countryside. In the premiere, Dawn Ward’s annual Crème De La Crème Charity Ball, one of the biggest events on the Cheshire social calendar, quickly approaches but not without a few snafus along the way. It’s a whirlwind of panicked last-minute dress fittings and big misunderstandings over tickets as the housewives prepare to make their grand appearance… even if they are unwelcome.

Former model and current life coach, Tanya Bardsley, is a self-proclaimed party girl, shopping enthusiast and plastic surgery lover. Tanya loves watching her soccer player husband, Phil Bardsley, score goals on the Stoke City soccer grounds. The two were married at the prestigious Peckforton Castle in Cheshire and traveled to Las Vegas for their honeymoon with friend of 10 years and fellow housewife, Leanne Brown and her husband.

Leanne Brown is a happy housewife who loves shopping, a good party and frequent trips to the salon. She and husband Wes Brown, a defensive soccer player for Sunderland, met at a nightclub and together have three daughters: Hallie, Lilia and Lola. Leanne is currently in the process of launching a children’s fashion line inspired by her own kids.

Originally from The Hague in Holland, bubbly and fiery Magali Gorré believes everything in life is about respect, not just money and riches. She and her husband of 21 years, ex-professional soccer player Dean Gorré, are the parents to three soccer-playing boys: Kenji, Quinten and Aidan. Magali is currently writing her third book and has written soccer columns for several media outlets including Esquire, Grazia and The Telegraph.

Savvy businesswoman and recent divorcee, Ampika Pickston, loves to be wined and dined from her many potential suitors. She runs her own lavishly-decorated beauty salon and spa, Opium, catering to the rich and famous of Cheshire. Ampika has one son, Jake, and a puppy named Bella whom she rescued from the animal shelter where she volunteers.

Born and bred in Cheshire, Lauren Simon is a stay-at-home mother and self-proclaimed “domestic goddess” who loves coffee, chocolate and men – but all have to be rich. It’s a good thing her husband of 10 years, successful businessman Paul Simon, can afford to pay for her expensive hobbies including diamond shopping and party planning. Before transitioning into her role as a full-time housewife, Lauren worked in public relations and marketing for VIP events and nightclubs.

Dawn Ward, a well-respected interior designer whose high-profile clients include British television presenters and models, has been married to Manchester City soccer player and businessman Ashley Ward for 19 years. With her impeccable eye for design, Dawn lives with her husband in a grand family home on multiple acres, which houses their four daughters, private horse stables, and a personal beauty salon. Dawn’s annual charity ball, Crème De La Crème, has some of the most sought-after tickets in all of Cheshire.

NBCUniversal International Studios delivers award winning international television to millions across the globe. Based in London, NBCUniversal International Studio’s in-house production labels include: Carnival Films, makers of the forthcoming drama The Last Kingdom for BBC2 and creators of the Emmy and Golden Globe award-winning drama sensation Downton Abbey; Monkey, which produces Newlyweds: The First Year, and Channel 4’s hit UK reality series, Made in Chelsea; factual entertainment label Chocolate Media, makers of The 21st Question for ITV, Driving School of Mum and Dad for Sky 1 and Inside Manchester’s Midland Hotel for Channel 5; Lucky Giant, which specializes in comedy and most recently produced Christopher Guest comedy Family Tree, for both BBC2 and HBO; and Australian-based Matchbox Pictures, makers of critically-acclaimed drama series The Nowhere Boys, The Slap and The Real Housewives of Melbourne. Additionally, NBCUniversal International Studios operate a joint production venture with Working Title Television, owns an equity stake in LARK Productions in Canada (Motive) and has a first look deal with Hardy Son & Baker and 87 Films. It also operates a prolific global formats business, and owns Tellycopter, a research and development resource that sits alongside its production companies.

Monkey is an award-winning independent production company that specialises in entertainment, comedy and factual programming. Founded in 2001, Monkey creates and produces content all round the world including new formats for networks both in the UK and the USA. These include scripted reality shows such as Made In Chelsea( E4), The Real Housewives of Cheshire (ITVBe) and Newlyweds (Bravo), studio entertainment shows including TFI Friday (Channel 4), The Charlotte Church Show (Channel 4), My Kind of Town (ABC), The Comedy Roasts (Channel 4), Grand Slam (Channel 4 and GSN), Sound (BBC2) and Born Sloppy (Channel 4), hidden camera formats such as Make My Day (Channel 4) and Swag (Five); and factual formats including Young, Dumb and Living Off Mum (BBC3), Party On (E!), The Passions of Girls Aloud (ITV2), Elton John: Me Myself and I (ITV1) and The House of Obsessive Compulsives (Channel 4).

What do you think? Do you plan to watch? How does Bravo define housewife, anyhow?

You’ll understand everything. They have lovely accents. The second season is even better, am loving it. Shame it’s ending soon .

Interesting. Will it have English subtitles in it? Just in case we might not understand their thick/strong English accents.