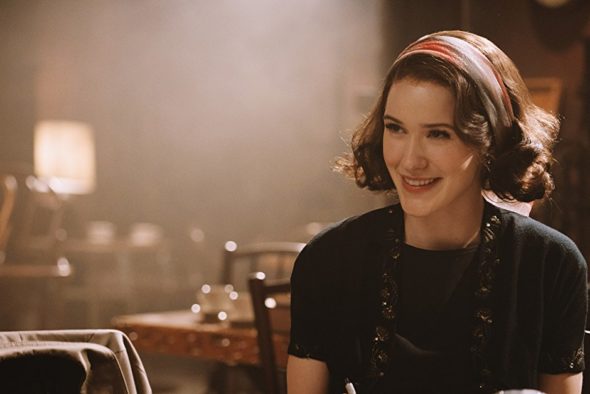 A comedic historical drama, The Marvelous Mrs. Maisel stars Rachel Brosnahan, Tony Shalhoub, Alex Borstein, Michael Zegen, and Marin Hinkle. Jane Lynch and Wallace Shawn will guest star in the first season, with Kevin Pollak, Bailey De Young, Joel Johnstone, and Caroline Aaron recurring. The Amazon TV series centers on Miriam “Midge” Maisel (Brosnahan), a wife and mother in 1950s New York City, who — after learning some life-changing personal news — tries her hand at standup comedy. The pilot is free to watch on Amazon. You can check it out, here.

The series, written and directed by Sherman-Palladino, stars Rachel Brosnahan (House of Cards) as Miriam “Midge” Maisel, a 1958 New York City woman who has everything she’s ever wanted—the perfect husband, two kids, and an elegant Upper West Side apartment perfect for hosting Yom Kippur dinner. But her perfect life suddenly takes an unexpected turn and Midge discovers a previously unknown talent—one that changes her life forever. She charts a course that takes her from her comfortable life on Riverside Drive, through the basket houses and nightclubs of Greenwich Village as she storms the world of stand-up comedy…a course that will ultimately lead her to a spot on Johnny Carson’s couch.

“Amy and Dan have made the rare, special series that’s as funny as it is beautiful. From the direction to the writing to Rachel’s incredible performance, every element is beyond what anyone could hope for,” said Joe Lewis, Head of Comedy, Drama & VR, Amazon Studios. “We can’t wait for customers to see it soon.”

The Marvelous Mrs. Maisel pilot, currently available for all Amazon customers at amazon.com/maisel, has garnered an average customer rating of 4.9, with 93% 5-star reviews.

Below are customer quotes for The Marvelous Mrs. Maisel:

“…fast-paced, with characters that are so well fleshed-out, funny, and ironic. I am looking forward to seeing so much more of The Marvelous Mrs. Maisel!”
“This wasn’t just funny. It was smart, sweet, and real. The jokes came from the loving and sincere well of everyday life.”
“Great! Funny, fast, witty, ironic.”
Prime members will be able to stream The Marvelous Mrs. Maisel via the Amazon Prime Video app for TVs, connected devices including Fire TV, mobile devices and online at amazon.com/maisel. Members can also download the series to mobile devices for offline viewing at no additional cost to their membership. The series will be a global release and available on Amazon Prime Video for members to watch via the Prime Video app or online at PrimeVideo.com in more than 200 countries and territories.

The Marvelous Mrs. Maisel is executive produced by Palladino and Sherman-Palladino, and produced by Dhana Gilbert.

What do you think? Have you watched The Marvellous Mrs. Maisel TV series pilot yet? How is it? Do you plan to check out the new TV show when it drops to Amazon?

This show was so mind blowing my good I was yelling at the tv when I realized amazon was sending me to a different show after I’d finished watching what was available of the amazing Mrs. Maisel. I haven’t seen a show this good since shameless and all in the family. For the last be of all that’s holy please anyone reading this whose in control : keep running more episodes. We MUST see more.