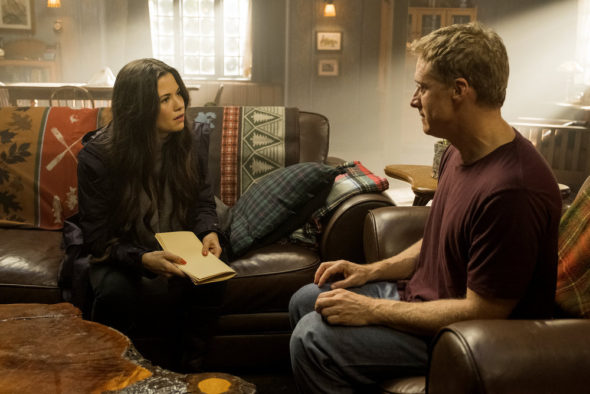 Are the residents of this town doomed? Has the Resident Alien TV show been cancelled or renewed for a second season on Syfy? The television vulture is watching all the latest cancellation and renewal news, so this page is the place to track the status of Resident Alien, season two. Bookmark it, or subscribe for the latest updates. Remember, the television vulture is watching your shows. Are you?

Airing on the Syfy cable channel, the Resident Alien TV show is based on the Dark Horse comic series and stars Alan Tudyk, Sara Tomko, Corey Reynolds, Alice Wetterlund, and Levi Fiehler. Recurring cast members include Linda Hamilton, Meredith Garretson, Elizabeth Bowen, Mandell Maughan, Alex Barima, Jenna Lamia, and Judah Prehn. The story revolves around Captain Hah Re (Tudyk), an alien with the secret mission to kill all humans. He crashes on Earth and passes himself off as a human doctor named Dr. Harry Vanderspeigle in a small town in Colorado. In his new guise, Harry starts off living a simple life but things get complicated when he’s roped into solving a local murder and realizes he needs to assimilate into his new world.

The first season of Resident Alien averaged a 0.19 rating in the 18-49 demographic and 1.12 million viewers. Find out how Resident Alien stacks up against other Syfy TV shows.

Will Syfy cancel or renew Resident Alien for season two? The cable channel has far fewer original series these days so it’s hard to judge what a show’s chances of survival are. That being said, this comedy is doing very well so I am confident that it will be renewed. I’ll update this page with breaking developments. Subscribe for free alerts on Resident Alien cancellation or renewal news.

3/18/21 update: Resident Alien has been renewed for a second season on Syfy.

What do you think? Are you glad that the Resident Alien TV show has been renewed for a second season? How would you feel if Syfy had cancelled this TV series, instead?

Glad to see a 2nd season coming up so happy . Thanks

Love this show every one shares the balance of conjoinig the talents from writers,actors,stage props

I love this series….. I really believe it will take off and be a major hit.. I’m glad there will be a second season…

Funniest original show on tv. Love that it’s witty and not a rehash of some old show or a game show for Pete’s sake. Hope it continues.

Just started to watch this- I do not watch much tv shows – But this one draws me in- writing is ok- I think I enjoy the characters . As with most shows it takes several shows to really get into the rhythm of the show. Characters are getting more personality now. Don’t screw it up by becoming too PC.

So funny so happy got renewed another season look forward next year until comes back on.

Resident Alien is the best and most original series I’ve seen in a long time. The writing is witty and very funny. My family and i love it..