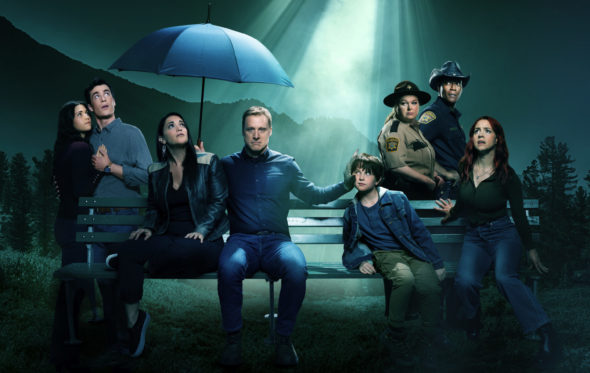 The story revolves around Captain Hah Re (Tudyk), an alien with the secret mission to kill all humans. He crashes on Earth and passes himself off as a human doctor named Dr. Harry Vanderspeigle in a small town in Colorado.

In his new guise, Harry starts off living a simple life but things get complicated when he’s roped into solving a local murder and realizes he needs to assimilate into his new world. As he does so, he begins to wrestle with the moral dilemma of his mission and asking the big life questions like: “Are human beings worth saving?” and “Why do they fold their pizza before eating it?”

Other town residents include Asta Twelvetrees (Tomko), Harry’s strong and sarcastic co-worker at the town’s health clinic; Sheriff Mike Thompson (Reynolds), who runs the town with a chip on his shoulder and an iron fist; charismatic bartender D’Arcy Bloom (Wetterlund) who, as a former Olympic snowboarder, is also a part of the avalanche control team; and naive Mayor Ben Hawthorne (Fiehler), whose eight-year-old son, Max (Prehn), is suspicious that the new local doctor is an alien.

What do you think? Do you like the Resident Alien TV show? Do you think it should be cancelled or renewed for another season?

Thanks SYFY for the new show ‘Resident Alien’. It is a great show! It is the best show now on TV. Please do not cancel this show. Looking forward to the New Season 2023 shows. Peace, Marc

It´s a great show. I am looking forward for third season!!!!

Do not cancel this series

Resident Alien has been one of the best shows to stream on tv.
I have not been this excited about a program in a long time!
Looking forward to seeing more of this show.
Season 2 RADIO HARRY WAS A GREAT EPISODE!
I developed a crush on the native baseball player.

It took an episode or 2 to get hooked but now just rally really enjoy this show. I NORMALLY DONT WATCH ANY SERIES. My daughter introduced me to this show.

This is a great show. We get excited to watch each episode. The plot twists are funny and great (always keeps you hooked). Please renew this series as it is a grerat draama and comedy.