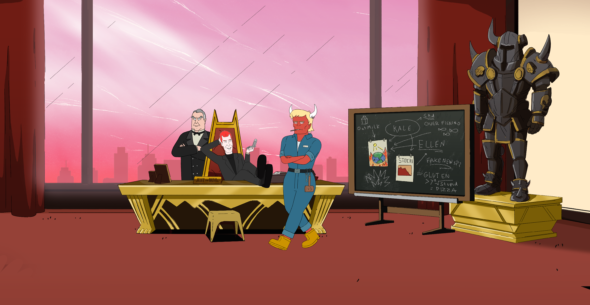 Syfy is getting animated. A new animated series, titled Devil May Care, is coming to the network, and it will be a part of a late-night animated series line-up. Alan Tudyk is featured in that series.

Syfy revealed more about the new animated series in a press release. Check that out below.

“SYFY has announced new original projects for its late-night adult animation block, TZGZ, including a new original animated series and three original pilots. Airing on SYFY every Saturday at midnight-ish, TZGZ is a 90-minute block of adult comedic, animated, genre-based programming of varying lengths. Since its 2019 debut, TZGZ has grown +7% in the 18-49 demo vs prior year, and continues to bring younger viewers to the network.*

DEVIL MAY CARE, TZGZ’s second internally developed pilot greenlit to series, has earned a 7-episode series pickup. For the series, the Devil (Alan Tudyk, SYFY’s Resident Alien) hires a social media coordinator (Asif Ali, BoJack Horseman) to rebrand Hell as the ultimate place to live, and the two form the most unlikely of friendships. Recurring roles are played by Fred Tatasciore, Pamela Adlon and Stephanie Beatriz.

What do you think? Will you check out Devil May Care on Syfy?