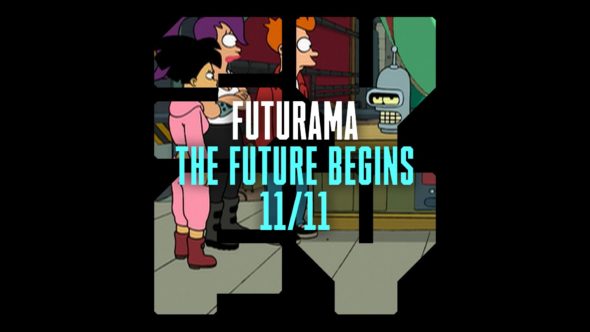 When Bender said, “Anything less than immortality is a complete waste of time,” it seems like Syfy took him seriously. Syfy has picked up all 140 HD episodes of Matt Groening’s animated Futurama TV show. The complete Futurama series kicks off on Syfy on Saturday, November 11, 2017, then will settle into its regular time slots on Mondays, Tuesdays, and Saturdays. Get the details from the Syfy press release, below.

NEW YORK, NY – October 3, 2017 – SYFY today announced that it has acquired the hit animated series “Futurama” from Twentieth Television in a multi-year, non-exclusive deal that includes all 140 HD episodes of the series. “Futurama” will make its SYFY debut in a special weekend stunt beginning Saturday, November 11, with the series airing regularly in primetime on Mondays and Tuesdays from 8PM-2AM ET/PT and on Saturday mornings from 8-11AM ET/PT.

The “Futurama” acquisition comes as SYFY continues to aggressively expand its genre programming following its summer 2017 brand reboot. “Futurama” – the first fully animated series in SYFY’s rebooted lineup – will join a growing roster of ambitious scripted and unscripted originals and high profile acquired series and movies that reflect the rich depth of the genre.

“We’re continuing to invest heavily to give our passionate fans the very best in genre programming, and I can think of no better addition to SYFY’s lineup than one of my personal favorites, ‘Futurama’,” said Chris McCumber, President, Entertainment Networks (USA and SYFY) for NBCUniversal Cable Entertainment.

First airing on FOX from 1999-2003, “Futurama” was brought back in 2007 with four direct-to-DVD movies that subsequently aired as 30-minute episodes on Comedy Central. Based on their success, Comedy Central ordered new seasons of the series which debuted in June 2010. Over the course of its storied run, “Futurama” has earned six Emmy Awards®–including two for Outstanding Animated Program, seven Annie Awards, two Environmental Media Awards and two Writers Guild of America Awards.

In addition to current acclaimed series like THE EXPANSE, THE MAGICIANS and CHANNEL ZERO, upcoming SYFY originals include the December 6 premiere of HAPPY!, an out-there graphic novel adaptation starring Christopher Meloni and featuring the voice of Patton Oswalt as the animated title character – and the highly anticipated Superman prequel KRYPTON (2018). SYFY is also currently developing several notable properties, including pilot orders for an adaptation of George R.R. Martin’s space opera novella NIGHTFLYERS and a reboot of the 1990 cult classic TREMORS.

SYFY is a global, multiplatform media brand that gives science fiction fans of all kinds a universe to call home. Celebrating the genre in all its forms, SYFY super-serves passionate fans with original science fiction, fantasy, paranormal and superhero programming, live event coverage and imaginative digital and social content. The brand is powered by SYFY WIRE (www.syfy.com), the premier portal for breaking genre news, insight and commentary. SYFY is a network of NBCUniversal, one of the world’s leading media and entertainment companies. NBCUniversal is a subsidiary of Comcast Corporation.

Hatched from the mind of The Simpsons creator Matt Groening, Futurama blasts contemporary culture and science fiction alike with an animated comedy barrage. Hapless NYC pizza guy Philip J. Fry makes a fateful delivery to a cryonics lab on New Year’s Eve, 1999 when he’s accidentally flash-frozen until the next millennium. Reawakened in 31st century New New York, he finds work at his great-great-etc. grandnephew’s Planet Express delivery service. Together with his hedonist robot buddy bender and cyclopsian love interest Leela, Fry travels to the farthest reaches of the universe. Along the way they discover strange alien life forms, velour-clad lotharios, freaky mutants, intergalactic conspiracies and the disembodied heads of celebrities throughout the ages.

What do you think? Are you a fan of the Futurama TV series? Do you plan to check it out, or revisit it on Syfy?

I wish Syfy was reviving Futurama for a eighth season.