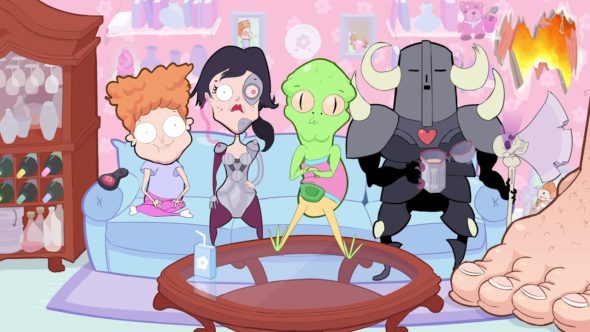 Syfy is getting into animation in a big way. Deadline reports the network has ordered a second season of Hell Den as well as several new series, including Dr. Havoc’s Diary and Wild Life.

PLUTONIANS (working title)
Pilot order (15 min episodes)
Produced by Brave Media and Yeti Farm
LOGLINE: The Interplanetary Federation has conferred and it’s official: Pluto is no longer a planet. The Plutonians are now determined to rebrand their image and prove themselves to the other planetary beings of the solar system – with the exception of Earth, who are notorious bullies and can’t find out about alien life.

PSYCHO PSALMS
Pilot order (15 min episodes)
Produced by Open the Portal and Jacob Robinson, head of Tractor Pants, an animation-centric production company with an overall deal at Legendary Television Studios.
LOGLINE: Psycho Psalms is a stop motion dark comedy following 1940s D-List cartoon character Timecrow and his misfit costars, as they attempt to navigate our postmodern internet hellscape after being yanked through a portal to our present day. These offbeat characters will take you to a dark place, but they won’t leave you there.”

What do you think? Do you watch TZGZ? Which new series will you check out?