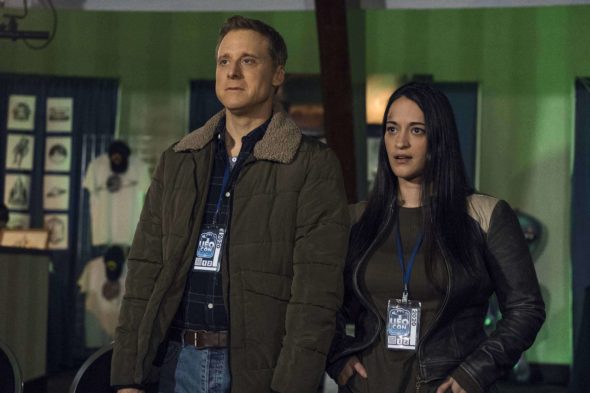 Harry is returning to Syfy and he’s bringing a couple of monster hunters with him. The cable channel has announced that the second season premiere of Resident Ailen has been paired with the launch of the new Astrid & Lilly Save the World TV series on January 26th.

Resident Alien stars Alan Tudyk, Sara Tomko, Corey Reynolds, Elizabeth Bowen, Alice Wetterlund, Levi Fiehler, and Judah Prehn. It revolves around an alien named Harry who finds himself stranded on Earth with a mission to kill humans. Astrid & Lilly Save the World stars Jana Morrison and Samantha Aucoin as a pair of best-friend high schoolers who accidentally open a portal to a terrifying and quirky monster dimension. The fate of the world rests in their hands.

Here’s some more information about the show premieres:

SYFY SETS JAN. 26 FOR SEASON TWO LAUNCH OF “RESIDENT ALIEN” AND SERIES PREMIERE OF “ASTRID & LILLY SAVE THE WORLD”

· Mid-season finale on March 16, continues with additional episodes in summer

· Ranks as the #1 new cable series in 2021 across all key demos as well as one of the top cable dramas of the year.

· Based on the Dark Horse comics, SYFY’s “Resident Alien” follows a crash-landed alien named Harry (Alan Tudyk) whose secret mission is to kill all humans. In season two, Harry is once again stranded on Earth where he must confront the consequences of having failed his people’s mission to destroy the human race. On his new quest to protect the people of Earth, Harry struggles to hold on to his alien identity as his human emotions grow stronger by the day. In an adventure that takes Harry and Asta (Sara Tomko) all the way to New York City, Asta brings Harry into the arms of someone he can call family. While back in Patience, Sheriff Mike (Corey Reynolds) and Deputy Liv (Elizabeth Bowen) find themselves closer to unraveling the mystery of Sam Hodges’s murder.

ASTRID & LILLY SAVE THE WORLD

· High school is hard enough when you’re different, but when outcast BFFs Astrid (Jana Morrison) and Lilly (Samantha Aucoin) accidentally crack open a portal to a terrifyingly quirky monster dimension, it gets a lot more complicated. It’s up to them to vanquish the creepy creatures and save the world, becoming the badass heroes they were meant to be. That is, if they can survive the horrors of high school.

· “Astrid & Lilly Save the World” was written by Noelle Stehman and Betsy Van Stone, who executive produce along with Lance Samuels, Daniel Iron and Samantha Levine. Blue Ice Pictures will produce.

What do you think? Are you looking forward to the second season of the Resident Alien series? Will you check out the new Astrid & Lilly Save the World show?

Love Resident Alien !!! So happy to see the show come back !!!
Love Alan playing the Alien, he is fantastic !!!

So glad it is coming back…I’ve been waiting. Love the plot of the show and the actors!

Good news (for a change). “Resident Alien” is a hoot, and Alan Tudyk is emerging as a comedy golden boy.
Welcome back!