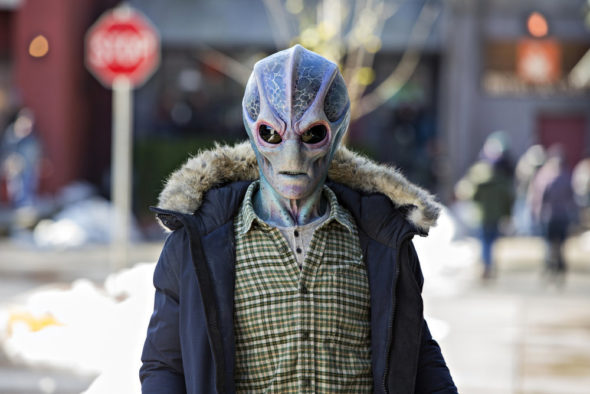 Resident Alien is coming to Syfy and the cable channel has released a sneak peek for the series — the first seven minutes of the premiere. Alan Tudyk leads the cast of this sci-fi series, which also stars Sara Tomko, Corey Reynolds, Alice Wetterlund, and Levi Fiehler.

Based on the Dark Horse comic by Peter Hogan and Steve Parkhouse, the series follows an alien who crash lands on Earth and tries to pass off himself as human. Syfy revealed more about this new sci-fi series in a press release.

“For the NYCC panel, stars Alan Tudyk (Rogue One), Sara Tomko (Once Upon A Time), Corey Reynolds (The Closer), Alice Wetterlund (Silicon Valley) and Levi Fiehler (Mars), alongside executive producer and showrunner Chris Sheridan (Family Guy), dialed in from Vancouver, where they’re back in production to finish filming the season. After playing an extended sneak peek of the first episode, IGN’s Laura Prudom led a discussion about bringing the comic’s story and characters to life, the show’s heart and humor, quarantine hairstyles, alien sightings, guest stars like Linda Hamilton, and more!

ABOUT RESIDENT ALIEN:
Based on the Dark Horse comic, SYFY’s RESIDENT ALIEN follows Harry, an alien played by Tudyk that crash lands on Earth and passes himself off as a small-town human doctor. Arriving with a secret mission to kill all humans, Harry starts off living a simple life… but things get a bit rocky when he’s roped into solving a local murder and realizes he needs to assimilate into his new world. As he does so, he begins to wrestle with the moral dilemma of his mission and asking the big life questions like: “Are human beings worth saving?” and “Why do they fold their pizza before eating it?” Tomko, Reynolds, Wetterlund and Fiehler star as the big personalities of small-town Patience, Colorado.

From UCP, in association with Amblin TV and Dark Horse Entertainment, RESIDENT ALIEN was adapted to television by Sheridan. Mike Richardson (Hellboy) and Keith Goldberg (The Legend of Tarzan) of Dark Horse Entertainment (The Umbrella Academy), and Justin Falvey (The Americans) and Darryl Frank (The Americans) of Amblin TV also executive produce. David Dobkin (Wedding Crashers) executive produced and directed the pilot.”

Check out the sneak peek for Resident Alien below.

What do you think? Are you planning to check out Resident Alien on SyFy when it debuts in January 2021?

I love this show, nice and refreshing. Nothing like a new great twist. Getting tired of reality shows. My Wednesday’s just doesnt get here fast enough. Im one that if i don’t like a show, i dont bother, if i like it i can watch the show repeatedly. Please keep my Wednesday’s on track

WOW IF the rest of the show is half as good as the seven short minute preview I just watched then I am hooked on this new AWESOME TV show called ( RESIDENT ALIEN ) to watch in January YESSSSSSSS !!!!!!!!!