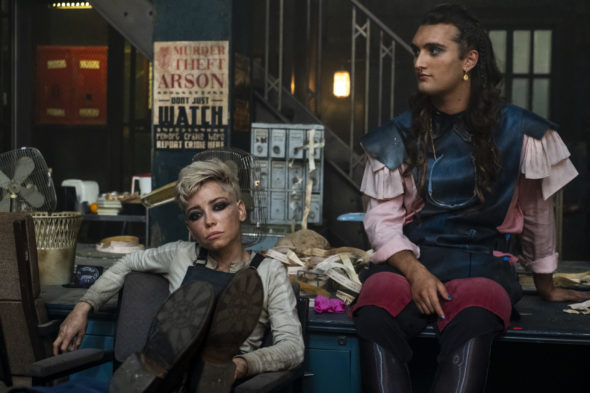 The Watch is coming to BBC America, and the cable channel has now set a premiere date. Several videos were also released for the new drama series about a group of misfits called The City Watch, who must find a way to save the world. The new series will arrive in January 2021.

BBC America revealed more about the new series in a press release.

“During BBC AMERICA’s virtual New York Comic Con panel for its newest original series, The Watch, released today, it was announced that the series will premiere on Sunday, January 3rd at 8PM ET/PT. Additionally on the panel, it was revealed that Wendell Pierce (The Wire, Selma) and Matt Berry (What We Do in the Shadows, Year of the Rabbit) are joining the series voicing the characters of “DEATH,” a dry, sardonic Grim Reaper, and “Wayne,” a magical speaking sword, respectively.

The panel, moderated by actress and host Yvette Nicole Brown (Community, Avengers: End Game), sees stars Richard Dormer (Game of Thrones), Lara Rossi (I May Destroy You), Adam Hugill (1917), Jo Eaton-Kent (Don’t Forget the Driver) and Marama Corlett (Blood Drive), along with lead writer and executive producer Simon Allen (The Musketeers) and executive producer Richard Stokes (Broadchurch), discuss the origination of the series sharing anecdotes from filming earlier this year while providing a first look at the series via clips and a teaser trailer.

The Watch follows an unlikely group of misfits, The City Watch, who are forced to find the guts to save the world, surprising even themselves in the process. The comedic yet thrilling series pits trolls, werewolves, wizards and other improbable heroes against an evil plot to resurrect a great dragon which would lead to the destruction of life as they know it. From lead writer and executive producer Simon Allen, the modern and inclusive series is inspired by the characters created by Sir Terry Pratchett’s famous “Discworld” novels, including the captain of The City Watch Sam Vimes (Dormer), the last scion of nobility Lady Sybil Ramkin (Rossi), the naïve but heroic Carrot (Hugill), the mysterious Angua (Corlett) and the ingenious forensics expert Cheery (Eaton-Kent) together with The Watch’s own idiosyncratic depiction of Death (Pierce).

Further casting includes Paul Kaye (Game of Thrones) who plays Inigo Skimmer, a.k.a. The Duke of Stab, a member of the Assassins’ Guild whose long and distinguished career is jeopardized when he runs into The City Watch, as well as Ralph Ineson (Chernobyl) who is voicing Sergeant Detritus, a huge a troll made of stone and a member of The City Watch. An elemental exemplar of truth, loyalty and kindness, Detritus and Vimes have been close friends for many years since each saved the other from ruin.

Check out the videos with footage of The Watch below.

What do you think? Are you planning to check out The Watch on BBC America when it premieres in 2021?

No won’t be watching “the watch” from what I’ve seen they have ruined every character and just spat on the already existing story.