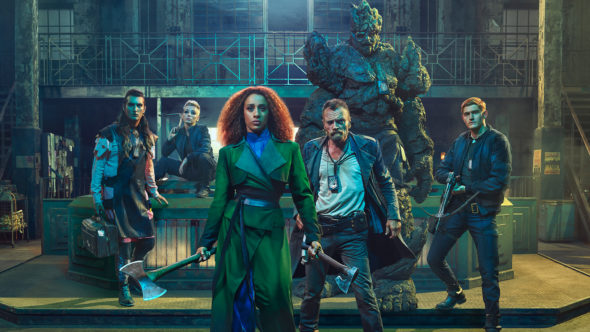 TV show description:
A fantasy police procedural series, The Watch is inspired by the Discworld novels by Sir Terry Pratchett.

Set in the fictional Discworld’s principal city of Ankh-Morpork, the story follows an unlikely group of misfits called The City Watch. They are forced to find the guts to save the world and surprise even themselves in the process. The series pits trolls, werewolves, wizards, and other improbable heroes against an evil plot to resurrect a great dragon which would lead to the destruction of life as they know it.

What do you think? Do you like The Watch TV show? Do you think it should be cancelled or renewed for another season?

I loved THE WATCH! Looking forward to Season 2!!

Neil Gaiman compared the series to “Batman if he’s now a news reporter in a yellow trenchcoat with a pet bat”.

Love The Watch, hoping for series 2

Hope it gets renewed

Really love The Watch sending praise from NYC. Excellence all around.

I love this program. It is quirky and sometimes hard to follow, but it still is entertaining. Please keep it running.

Don’t watch this kind of programming.