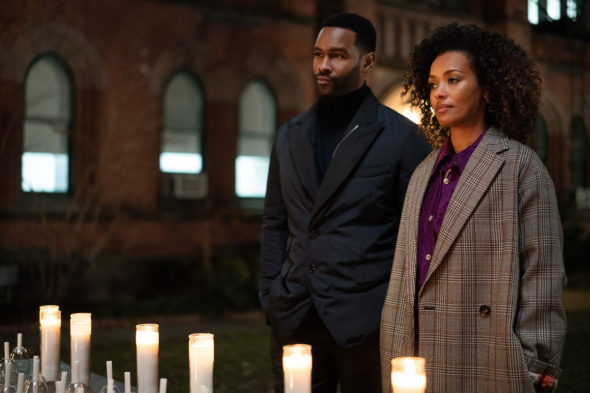 A Starz crime drama series, Power Book II: Ghost is a spin-off of the Power TV series and picks up days after the finale. Ghost stars Michael Rainey Jr., Naturi Naughton, Mary J. Blige, Clifford “Method Man” Smith, Daniel Bellomy, Gianni Paolo, Justin McManus, LaToya Tonodeo, Lovell Adams-Gray, Melanie Liburd, Paige Hurd, Quincy Tyler Bernstine, Shane Johnson, Woody McClain, and Sherri Saum. In the story, Tariq St. Patrick (Rainey Jr.) is a freshman at Stansfield University with a bright future ahead of him. He would be the embodiment of his father’s dreams, if not for the double life he’s living. With his mother, Tasha (Naughton), in jail for the murder of his father, Tariq is forced to split his time between school and hustling to pay for Davis MacLean (Smith), the fame-hungry defense lawyer. With no better options, Tariq turns to the familiar drug game, entangling himself with a cutthroat family headed by Monet Stewart Tejada (Blige).

*9/23/20 update: Power Book II: Ghost has been renewed for a second season on Starz.

The story line has potential to be great. Some of the acting is not plausible. While the character of Monet can be great, it being played by Mary J. Blige is not believable. Her acting is very dry, all of her expressions are the same and she delivers the character very bland. Her character is designed that people wld be afraid of her as a queen pin. With Mary J.’s acting of Monet, no one shld be afraid of her, not even a toddler. The young lady that plays Lauren acting is not good either. All of her mannerisms are… Read more »

I can not wait for the new season 2 start I have missed this show I really enjoy it a lot. It shows a lot of the Dynamics between people and friendships and what happens with different people in a circle of friends and it’s wonderful the way it all plays out I have lived many of the situations that I’ve seen on this show and I love it. Each actor has their own personalities and they each bring something wonderful to the show each one of them shows their personalities in the mix just matching perfectly together and I… Read more »

Elizabeth A Conley
Reply to  Patrick

I agree, Ghost, Tommy, cane…etc was the reason I watched Power. To be honest Tariq was not even in the top 10 of my favorite cast members. Not sure why they decide to make him the showrunner. I was hoping the spin-off would be Tommy setting up shop in Cali or a prequel bringing Ghost and Angela back. Just my two cents.

There is going to be more than one spin off .Power book 2 is setting up the story line of life after ghost. With season 1s finale watched i cant wait to see season 2 . Give it another chance I didn’t get into it until episode 3 . I’m glad I kept watching