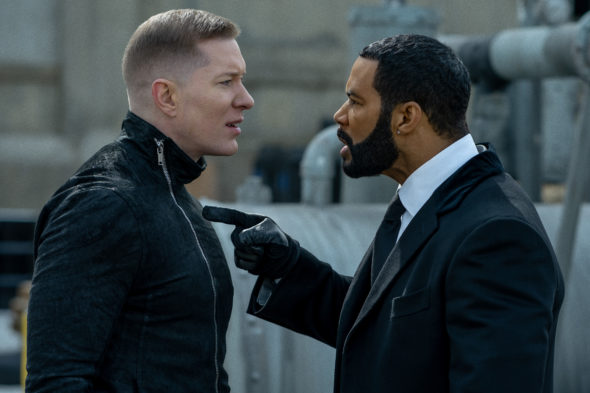 Will Ghost get what he’s after? Is the Power TV show cancelled or renewed for a seventh season on Starz? The television vulture is watching all the latest cancellation and renewal news, so this page is the place to track the status of Power, season seven. Bookmark it, or subscribe for the latest updates. Remember, the television vulture is watching your shows. Are you?

The sixth season of Power is averaging a 0.43 rating in the 18-49 demographic and 1.22 million viewers. Compared to season five, that’s down by 23% in the demo and 10% in viewers. Learn how Power stacks up against other Starz TV shows.

We don’t have to worry if Starz will cancel or renew Power for season seven. The sixth season was announced as the final season when the premiere date was released. However, there will be a spin-off so, while it is the end of this show, it’s not the end of the story. I’ll keep an eye on the Nielsens and update this page as the season progresses. Subscribe for free Power news alerts.

What do you think? Is the Power TV show ending at the right time? Will you watch any spinoffs on Starz? If it were up to you, would this TV series be cancelled or renewed for a seventh season?

I think there should be the seventh season. Why was it cancelled? What happens to Tommy? There was still so many murderers and drug dealers and liars that got away with all their sins so what happened to all of those characters? It really sucks that they ended it the way they did. Big huge massive let down.

when is the spinoff featuring m.j starting

Hi i live in the uk & I love power so get annoyed when I have to wait a week until Monday to watch the next episode that brilliant I don’t want it to end & yeah a spin of with Tommy defo but would also love a season 7 of power aint missed a episode watched it from beginning to end so far.

There should be a spinoff starring Tommy.His character made the show to me.Loved it.

Only spin off i would watch is Tommys. Tariq spin off no way. Dre spinoff no way. The two most annoying characters.

I have watched power from the beginning. I told everyone about power. And now all my friends watch power. And every week I waited to watch it at 12am Saturday night. And I can definitely say power is wanna the best shows out. I liked every episode except how that last episode ended. REALLY.

Well, cancelling this show is a giant mistake. But I saw that coming considering they have been killing off every single major character one at a time. It really sucks. The show is spectacular and it has been my favourite for years. Really fiesty, beautiful, exciting and hot as well. It will take ages before anyone makes another new thing like this one (if ever). I can’t understand the reason behind this decision to cancel it. You aren’t gonna make better shows!

You are so rite

I have so enjoyed Power, I would love a season 7 see what’s going on with tariq, tashia etc.

After Angie die Power became boring, I dont think they will ever get the same ratings or even close. Is funny how they were unable to realize that Angela was as important as Ghost, probably thats the reason for having her in Ghost visions on the entire Season Seven.

I disagree. Also seeing her come back as a ghost was annoying.

I didn’t like her being the other woman. The only thing that she and Ghost did was have sex all the time.

yea but it was more to them to ms.kitty they was in love

I really want ghost back ….