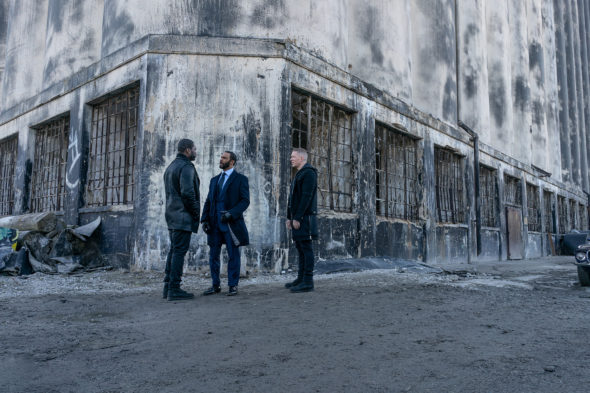 Is Ghost still in power? Is the Power TV show cancelled or renewed for a sixth season on Starz? The television vulture is watching all the latest cancellation and renewal news, so this page is the place to track the status of Power, season six. Bookmark it, or subscribe for the latest updates. Remember, the television vulture is watching your shows. Are you?

A Starz crime drama, Power follows James “Ghost” St. Patrick (Omari Hardwick). The owner of New York’s Truth nightclub, Ghost is a major drug distributor, who has been struggling to go legit. Joseph Sikora, Naturi Naughton, and Lela Loren also star. Season five of Power kicks off with Ghost in a tricky alliance with his former drug partner Tommy Egan (Sikora) and mortal enemy Kanan Stark (EP Curtis “50 Cent” Jackson). Still grieving his daughter, Ghost throws himself into his work. As the Feds close in, he must remain ever on guard.

The fifth season of Power averaged a 0.56 rating in the 18-49 demographic and 1.36 million viewers. Compared to season four, that’s down by 28% and 23%, respectively. Learn how Power stacks up against other Starz TV shows.

We don’t have to worry if Starz will cancel or renew Power for season six. It was renewed back in March, when the fifth season premiere was announced. Now we have to figure out whether or not that will be the last season. To some extent, that could be a creative decision, but the ratings did drop, last year. It’s still early, so I’ll keep an eye on the Nielsens and update this page with breaking developments. Subscribe for free Power cancellation or renewal alerts.

5/9/19 update: Starz has confirmed that season six is the end.

What do you think? Do you hope the Power TV show will be renewed past season six? How many seasons do you expect this Starz TV series to run?

We can at least finish out the season I think

Please don’t cancel Power!!!! I love this show!! Tommy is a nut!!! So please continue it PEASE