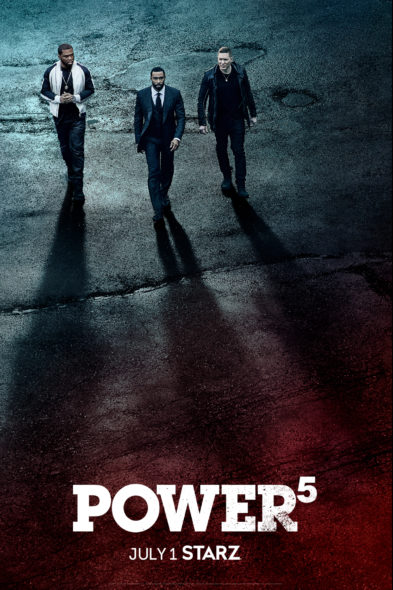 “We’ll all feel better, once this is over.” So says the trailer for the fifth season of the Power TV show on Starz. That’s not a hint that it will be cancelled soon, either. Starz already renewed Power for a sixth season, back in March of this year. As previously announced, Power season five premieres on Sunday, July 21, 2018 at 8:00pm ET/PT. Check out the details on the download availability, below .

West Hollywood, Calif. — Starz, a Lionsgate company (NYSE: LGF.A, LGF.B), today released the official season five trailer of “Power” to a packed house during the series’ For Your Consideration panel at the Jeremy Hotel in West Hollywood. The audience was surprised with the never-before-seen trailer giving them a first look into the much-anticipated fifth season which will return on Sunday, July 1st at 8PM ET/PT on STARZ, and available for download and streaming on the STARZ app and STARZ ON DEMAND starting at 12:01AM ET.

“Power” season five picks up with James “Ghost” St. Patrick in a dangerous alliance with his former drug partner and brother-in-arms Tommy Egan and mortal enemy Kanan Stark. As Ghost mourns the death of his daughter Raina, he searches for vengeance and throws himself into his work, reaching new, professional heights. But with this newfound publicity, his quest for blood threatens to dismantle his legitimate legacy. Ghost is blind to new enemies and, as the Feds grow closer to unmasking his true identity, Ghost must remain vigilant toward those wanting to take him down for his past criminal enterprises.

About “Power” “Power” is a visionary drama that straddles the glamorous Manhattan lifestyles of the rich and infamous and the underworld of the international drug trade. The cast is led by Omari Hardwick as James “Ghost” St. Patrick, a man trying to escape his role as a drug kingpin for a legitimized life in the elite of NYC; Joseph Sikora as his brother in arms in the drug business, Tommy Egan; Naturi Naughton plays Ghost’s fierce wife Tasha St. Patrick; and Lela Loren is his first love, Assistant U.S. Attorney Angela Valdes.

What do you think? Are you a fan of the Power TV series? Do you plan to watch season five, when it premieres on Starz?