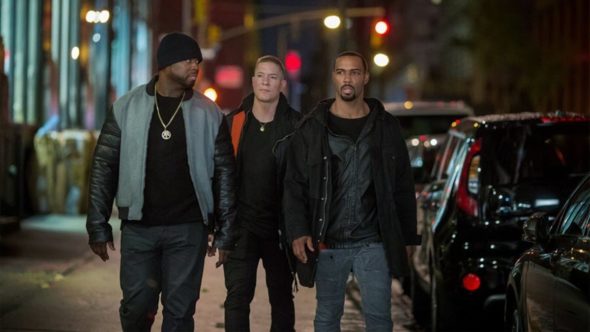 It looks like Power is coming to an end. Starz just announced the premiere date for the TV show’s sixth and final season.

Althought season six will be the final season for Power, executive producer Courtney A. Kemp says there are plans for spin-offs:

We will follow some of your beloved ‘Power’ characters beyond the scope of the initial series. But we will play with your expectations of which characters, where, and the master timeline of it all, creating a ‘Power’ universe as unpredictable as the original.”

The sixth and final season of Power debuts on Starz on August 25th.

Santa Monica, Calif. – May 9, 2019 – Starz, a Lionsgate company (NYSE: LGF.A, LGF.B), today announced that the first chapter of its #1 hit series “Power,” created by Courtney A. Kemp, will close with The Final Betrayal. A heightened and unpredictable journey that raises the stakes yet again, Season 6 will play out over a super-sized, 15-episode season, premiering Sunday, August 25, 2019 on STARZ, the STARZ app and STARZ ON DEMAND.

“Season 6 brings us to the end of what we know is just the first chapter of the ’Power’ story. However, as one chapter comes to an end, another will begin,” said Carmi Zlotnik, President of Programming for Starz. “Courtney Kemp and 50 Cent have created a world rich with complex and dynamic characters and there are a number of stories we plan to tell as we continue to explore and expand the ‘Power’ universe.”

“We will follow some of your beloved ‘Power’ characters beyond the scope of the initial series,” said Courtney A. Kemp, “Power” Executive Producer. “But we will play with your expectations of which characters, where, and the master timeline of it all, creating a ‘Power’ universe as unpredictable as the original.”

Season 6 will also feature the directorial debut of Curtis “50 Cent” Jackson with episode 603 as well as the return of Emmy® award-winning director Anthony Hemingway (“The People v. OJ Simpson: American Crime Story,” “Underground”), who helmed the first two episodes of the series when it debuted in 2014, to take the reins for the finale.

“The last 5 seasons of ‘Power’ have been an incredible ride for me and all of our supportive fans. We are far from over and I am excited to bring you more from the ‘Power’ brand,” said Curtis ‘50 Cent’ Jackson, “Power” Executive Producer. “I am proud that I was able to put a lasting stamp on this chapter with my directorial debut in an episode that features one of the wildest scenes ever on the show.”

Under Kemp’s leadership, the two-time NAACP Image Award-winning drama, which premiered on the premium cable network in 2014, garnered over 10 million multiplatform views in its fifth season and is the most-watched franchise for Starz. “Power” currently airs in over 120 countries around the world, including in Spain on Starz’ premium international streaming platform STARZPLAY.

Season 6 Synopsis “Power” Season 6 picks up with James “Ghost” St. Patrick seeking vengeance. His former drug partner and brother in arms must pay for the ultimate betrayal. Rocked to his core by the perfidiousness and cruelties of those he once called his family, Ghost devotes himself to one notion: Success is the best revenge, with all intentions of getting both. Ghost aims to get even with Tommy, get the Queens Child Project built to consecrate Raina’s legacy, and finally achieve a thriving legitimate lifestyle with no criminal strings attached. Ghost’s need to wrest satisfaction and happiness from this world by any means necessary – is the most dangerous he’s ever faced. As the Feds grow closer to convicting him, Ghost must remain vigilant toward those wanting to take him down for his past criminal enterprises.

About “Power” “Power” is a visionary drama that straddles the glamorous Manhattan lifestyles of the rich and infamous and the underworld of the international drug trade. The cast is led by Omari Hardwick as James “Ghost” St. Patrick, a man trying to escape his role as a drug kingpin for a legitimized life in the elite of NYC; Joseph Sikora as his brother in arms in the drug business, Tommy Egan; Naturi Naughton plays Ghost’s fierce wife Tasha St. Patrick; and Lela Loren is his first love, Assistant U.S. Attorney Angela Valdes.

What do you think? Do you watch Power? How do you want the series to end?

I hated that this show ended ..it was to soon …I was kind of angry actually lol ….best show ever smh

Power was a very entertaining Tv series and if it is at all plausible for a spin off to be created from the show by the surviving characters left. I welcome it to see how it plays out.

Oh I LOVE Power!You fall in love with each character like they are your own family.

I look forward to Sundays to see Power.
I love the show. My Sunday night’s won’t be the same. Thank you for a wonderful experience.

OMG!!!! I can’t believe that POWER is coming to an end I look forward to each season and talk about the past & present episodes with friends, family and co workers. LOVE this show would hate for it to end!!! The cast is amazing, story lines are intriguing and the BEST show to watch.. if this is really the end..sending positive vibes and God bless you all in your New Endeavors – hate too see ya go much Love

Where do we write to keep POWER on starz. I never can wait to watch it and like so so nany we want it to keep going..

Loved the show wish it would last a lot longer

Very written show for the most part. One thing about drugs shows, they don’t last long. Just like real life drug kingpins…

Power is one of my favorites and I wish it could go on and on. What you have told us sounds interesting, I just hope 50 does it right! Thanks

The show has a cult following. If you could keep the storyline going, I have no doubt the viewership would grow.

I love this show, thank you for not cancelling.