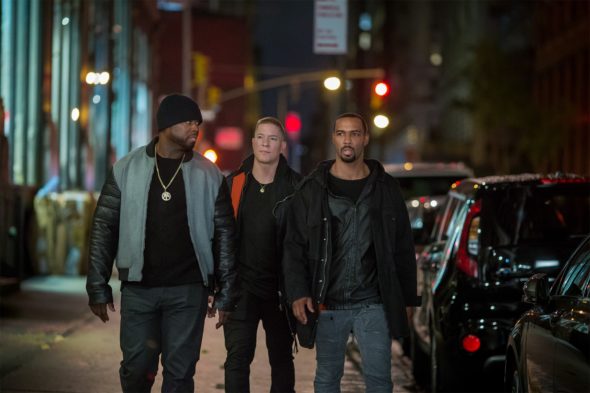 It’s time to power up. Starz has renewed its Power TV show for a sixth season. In addition, the cable network has announced the fifth season will premiere on Sunday, July 1, 2018, at 9:00pm ET/PT. The early Power season six renewal comes just as production is wrapping on season five. Sometimes, early renewals are a sign that a series is nearing its natural end. There’s no news on the front yet, but when we know more, you will, too.

STARZ ANNOUNCES SEASON FIVE OF “POWER” TO PREMIERE ON SUNDAY, JULY 1 AND AN EARLY RENEWAL FOR SEASON SIX

Beverly Hills, Calif. — In advance of production wrapping on season five, Starz announced today the early renewal of hit STARZ Original series “Power” for an additional sixth season, with Curtis “50 Cent” Jackson scheduled to direct the season six premiere episode. From creator and showrunner Courtney A. Kemp, “Power” has continued to perform for the network growing with each season and establishing several all-time high performances for STARZ viewership. The much-anticipated fifth season will return on Sunday, July 1st at 9PM ET/PT.

Starz President of Programming Carmi Zlotnik said, “As ‘Power’ wraps production on season five, we want to acknowledge and thank our spectacular ‘Power’ team for producing another great season. We are also pleased to announce a pick-up for season six.”

“Power” is the hugely successful New York-based crime drama created by Courtney A. Kemp who executive produces alongside Curtis “50 Cent” Jackson, Mark Canton, Randall Emmett, Gary Lennon and Shana Stein. The critically-acclaimed fourth season averaged 9.3 million multiplatform viewers per episode and is the most-watched franchise for Starz, averaging 7.4 million multiplatform viewers for all four seasons.* “Power” ranks number 3 among premium scripted series for viewers* * and was a top three Sunday night program on Nielsen Social Rankings nine out of 10 weeks.* * * The series is the recent recipient of three 2018 NAACP Image Awards® including “Outstanding Drama Series” and “Outstanding Actor in a Drama Series,” and a 2017 People’s Choice Award® for “Favorite Premium Drama Series.”

“Power” is a visionary drama that straddles the glamorous Manhattan lifestyles of the rich and infamous and the underworld of the international drug trade. The cast is led by Omari Hardwick as James “Ghost” St. Patrick, a man trying to escape his role as a drug kingpin for a legitimized life in the elite of NYC; Joseph Sikora as his brother in arms in the drug business, Tommy Egan; Naturi Naughton plays Ghost’s fierce wife Tasha St. Patrick; and Lela Loren is his first love, Assistant U.S. Attorney Angela Valdes.

The show is also produced by G-Unit Films and Television, the production company launched by Curtis “50 Cent” Jackson, and Canton’s Atmosphere Entertainment MM.

Power: A Look at the Ratings

The fourth season of Power averaged a 0.78 rating in the 18-49 demographic and 1.76 million viewers. Compared to season three, that’s down by 12% and down by 9%, respectively. By both measures, Power is the top rated series out of scripted Starz TV shows.

What do you think? Are you still a fan of the Power TV series? Do you plan to tune in for seasons five and six on Starz? Do you think this show will cancelled or renewed beyond that? Let us know, below.