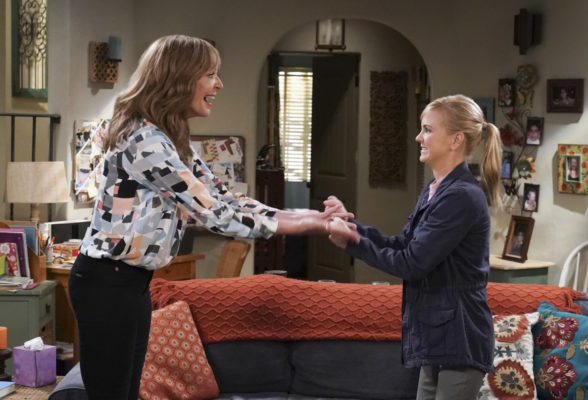 Are you feeling the love for Christy and Bonnie during the sixth season of the Mom TV show on CBS? As we all know, the Nielsen ratings typically play a big role in determining whether a TV show like Mom is cancelled or renewed for season seven. Unfortunately, most of us do not live in Nielsen households. Because many viewers feel frustration when their viewing habits and opinions aren’t considered, we’d like to offer you the chance to rate all the Mom season six episodes here. *Status update below.

A CBS sitcom, Mom stars Anna Faris, Allison Janney, Jaime Pressly, Mimi Kennedy, Beth Hall, and William Fichtner. The series centers on Christy (Faris), a single mom in recovery who has moved back in with her own single, recovering mother, Bonnie (Janney). Bonnie’s attempts to make up for her failings can try Christy’s patience. After all, she’s busy working on her relationships with her own kids and working toward a new career. Meanwhile, Bonnie is learning how to forge healthy relationships and still wonders what she’ll be when she grows up. Together, and with the help of AA, Christy and Bonnie spot one another along the road to recovery.

What do you think? Which season six episodes of the Mom TV series do you rate as wonderful, terrible, or somewhere between? Should CBS cancel or renew Mom for a seventh season? Don’t forget to vote, and share your thoughts, below.

I Love the show! I have watched it from the first season. It is hilarious! The actors and writing are great and it makes addictions and therapy less of a stigma for many people

I’ve loved all of the episodes of Mom except season 7 seems to be almost a total failure. Bonnie and Christie are now total bores. I’m am still getting some chuckles from the rest of the cast. Are the original writers still around? Please put some spunk and fire back into the show!

The best ,funniest show in years, I cant wait each day to watch episodes. It’s pretty much reality at its finest and funniest. I don’t know who the writers are but they DESERVE a golden globe,academy award etc. Genius comebacks & their both gorgeous. If & someday when the show comes to an end, I’ll just Die ! Please keep this show running. Thank you folks,you give me happiness.

Mom is a phenomenal show with an incredible cast. They are so talented at showing real life with just the right amount of humor sprinkled in. I love this show. I can’t say that about many shows now. I hope the show makes it to 20th season. It’s one of those shoes you don’t want to miss. If you do then you can’t wait to go to on demand and watch it. Christy’s character and Bonnie’s characters are award winning. The entire cast is excellent and hugely talented. I loved the addition of Adam. He adds even more humor and… Read more »

RENEW… Love the cast and show

Hi!! I don’t know how to explain my situation, but the sitcom Mom is making my day. I have a problem with eating disorder now, and a few years ago I was taking drugs and alcohol, there were all disasters in my life. And now I have a beautiful daughter, with whom I spend my time, I work, and I try always to be a good person. This has nothing to do with my comment on sitcom mom, but I had the need to say that this is for me the best sitcom that was filmed. It’s so real, funny,… Read more »

Tammy is an awesome addition to the show, she has fast become my absolute favorite character. No kids please. Keep Tammy!

I am a regular viewer of Mom, but I was really disappointed in the latest episode (S6, Episode 8). I wish Violet had been shown to have more compassion for Christy as the person she is now, recovering, rather than still showing so much anger for her mom as an alcoholic active in her disease. She certainly was accepting of Bonnie. However, I do understand being able to express real anger and pain from the past, but I remember Christy early in the show as being there for her daughter, i.e. the teenage pregnancy.

Yeah that was sad I totally agree and I wish christy’s son would come on as well.

Tammy needs to become a regular, the kids were never a good idea im glad they are gone but Tammy would be a great addition “Mom” is a fantastic show and Tammy is very funny

Will Kristin (Tammy) become a regular? What happen to the kids?

Mom is a great show with a fantastic cast & never fails to make us laugh out loud.

I a grew with you Rose! love love this show. I catch myself laughing out loud all the time. Fingers crossed they don’t cancel it!

Mom is one of THE best Shows on. You just cannot cancel it. It only gets better and better. Hilarious situations are on this show every week. We have so few COMEDIES. Keep it coming for a long time! Love it.

This show is so funny.
Love Adam, please keep him forever.
Love Tammy she is so funny.
I too don’t care for the kids.
I think if they are gonna have kids on this show they should be funny like Jake was on the show “Two and a Half Men.