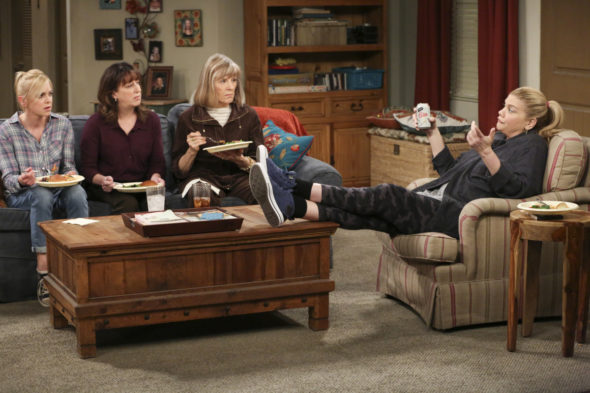 Will Bonnie’s marriage change things in the seventh season of the Mom TV show on CBS? As we all know, the Nielsen ratings typically play a big role in determining whether a TV show like Mom is cancelled or renewed for season eight. Unfortunately, most of us do not live in Nielsen households. Because many viewers feel frustration when their viewing habits and opinions aren’t considered, we invite you to rate all of the seventh season episodes of Mom here.

A CBS multi-camera sitcom, the Mom TV series stars Anna Faris, Allison Janney, Mimi Kennedy, Jaime Pressly, Beth Hall, William Fichtner, and Kristen Johnston. After years of questionable choices, Christy (Faris) is now sober and has her life mostly back on track — although she’s often tested by her mother, Bonnie (Janney), who’s also a recovering addict. These days, Christy is well on her way to becoming a lawyer, while Bonnie is in a healthy romantic relationship and has just gotten married to Adam (Fichtner). Through it all, Bonnie and Christy rely on their support system from AA, including the wise Marjorie (Kennedy), wealthy Jill (Pressly), overly emotional Wendy (Hall), and Bonnie’s foster sister, ex-con Tammy (Johnston). Though dysfunctional, this family sticks together and helps each other no matter what life may throw their way.

What do you think? Which season seven episodes of the Mom TV series do you rate as wonderful, terrible, or somewhere between? Do you think that Mom on CBS should be cancelled or renewed for a eighth season? Don’t forget to vote, and share your thoughts, below.

I love this show. Every actor and their character is spot on perfection. The addition of Will Sasso is great. I think Wendy needs romance and really, since opposites seem to attract, Ray Liotta would be so much fun matched with her!

This is my favorite show, especially the episodes with Andy and Jill. I don’t like the way Christie’s son is never mentioned or shown, but other than that I adore every episode. Kristen Johnston was a wonderful addition to the show.

Please please please keep MOM coming. I love this show. I’m 60 years old and I love it. It is a UNIQUE storyline and many people can relate to the situations from being previous addicts. Please don’t cancel. Ever!

I HAVE BEEN A SERIOUS FAN OF MOM SINCE ITS FIRST SHOWING. IT WAS A BLEND OF NON JUDGEMENTAL LOVE, CRAZY SCHEMES, TAKING RISKS, WEAVING RELIGION THROUGH ALL OF IT. IT HAD SOUL, AND THAT IS WHAT IS LACKING IN NEW RECENT VERSION. THE DIALOGUE IS TOO DRY . THE CHARACTERS NEVER COME ALIVE. THEY WOULD’NT CRY OVER JODY”S DEATH. BRING THE CHILDREN BACK BECAUSE THAT’S WHAT MADE THE “CRAZIES ” HUMAN”

I am so addicted to this show. I do hate that we never see Roscoe though. However, the addition of the hilarious Johnston (Tammie) and Jill’s relationship with the oh so lovable cop makes me love it more than ever. Please give us more air time with those two and Adam and Bonnie. Also, Rudy is hilarious. I’d love to see him fall hard for Tammie. Every character on the show is so imperfect, so realistic; I hope that it goes on at least until Christy graduates from law school and finds love.

We Love the show “MOM” Please keep it on! Looking forward to many more seasons. It is always entertaining with good laughs!

My wife and I love the show ‘Mom’! It is very funny! We love all of the characters Bonnie (Allison), Christy (Anna), Marjorie (Mimi), Jill (Jaime), Wendy (Hall), Kristen Johnston as Tammy, William as Adam! We also love Jill’s boyfriend and Adam’s Golden Retriever in the show! All of the characters are super Fantastic! We have wondered where Christy’s children went as well as her ex-husband? We know that he is on the new show ‘Bob Hearts Abishola’ (so we figured he is not in the ‘Mom’ show anymore). ‘Mom’ is a Great show and the comedy is very good!… Read more »

Love this sitcom It’s so funny!!

LOVE, LOVE, LOVE IT! This show makes me literally laugh out loud. I look forward to the new episodes every week! My only teeny tiny complaint lately tho, is that they’ve really turned Christy into a giant whiney child, & Bonnie’s suddenly become mother-of-the-year. It was a bit better/funnier when they had a bit more friction between them… & Christy acted more like an adult, & a mom herself. Speaking of which, what happened to her kids & ex-husband (Violet, Roscoe, & Baxter)? They used to make appearances often but I haven’t even heard their names mentioned in a long… Read more »

We love this show and also watch the re-runs. i think one of their funniest shows was when they accidently ate the pot brownies, and were all Skipping. I hope they keep this show going for a long time, because it really is funny.

the first four seasons were great however, the last two seasons seem to have lost its edge. Not sure if the original writers left or what but, the humor is lacking. Sorry to see this. I loved this show.