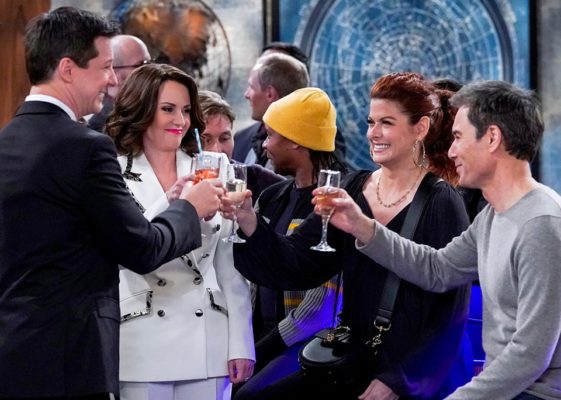 Will the Will & Grace TV show on NBC have a happier ending this time? As we all know, the Nielsen ratings typically play a big role in determining whether a TV show like Will & Grace is cancelled or renewed for season 12 (in this case, we already know it’s ending). Unfortunately, most of us do not live in Nielsen households. Because many viewers feel frustration when their viewing habits and opinions aren’t considered, we invite you to rate all of the 11th season episodes of Will & Grace here.

What do you think? Which season 11 episodes of the Will & Grace TV series do you rate as wonderful, terrible, or somewhere between? Do you think that Will & Grace on NBC should have been renewed for a 12th season? Don’t forget to vote, and share your thoughts, below.

I LOVED THE I LOVE LUCY EPISODE.. GRACE DOES THE BEST LUCY IMITATION..
WHAT I WOULD LIKE TO SEE IS MOVING IT TO TUESDAYS OR SATURDAYS…
THIS IS ONE OF THEEEEE BEST COMEDIES…
PLEASEEEEE DONT CANCEL IT…

Always loved the show and still do,just ignore the political stuff if it bothers you ,who cares the show is hilarious! Karen is too funny! I would love it to continue.

WHY DON’T YOU REMIND VIEWERS TO VOTE ONLONE FOR THESE SHOWS TO KEEP RATINGS UP????
MANY OF US DONT EVEN KNOW ABOUT THESE SITES TO BE ABLE VOTE..

Disappointed that the stars have to bring their political views into discussion on their social media groups. No longer watch the show due to this

I’ve loved Will and Grace since the beginning! My friends and I were so happy for its return. We always record it just in case we’re out. Soooo disappointed it’s been ambushed to deny our FAV a 12th season. The writing and acting are impeccable. Why can’t I be in the Neilson ratings. I’ve wanted that since I was young. I have great taste and watch a variety of different kinds of shows. Begging for a 12th chance!

Sooooo glad to see this one go! I hope “Grace” never finds another job. Used to be a fan but certainly not any longer.