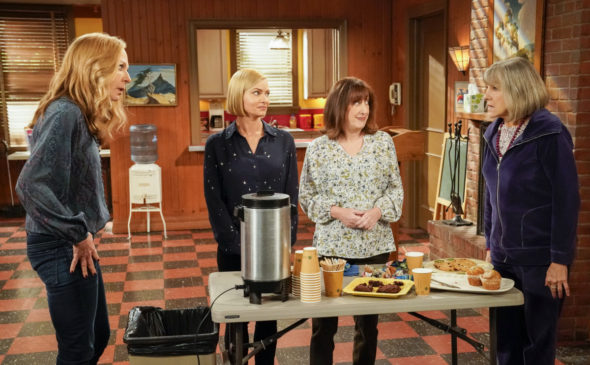 Can this show continue without half of its two main characters? Has the Mom TV show been cancelled or renewed for a ninth season on CBS? The television vulture is watching all the latest cancellation and renewal news, so this page is the place to track the status of Mom, season nine. Bookmark it, or subscribe for the latest updates. Remember, the television vulture is watching your shows. Are you?

Airing on the CBS television network, the Mom TV series stars Allison Janney, Mimi Kennedy, Jaime Pressly, Beth Hall, William Fichtner, and Kristen Johnston. Recovering addict Bonnie (Janney) must learn to adjust to life without her daughter and former-roommate, Christy (Anna Faris), around. With a chaotic past behind her and a newly empty nest, Bonnie focuses on her marriage to her husband, Adam (Fichtner), and on what she wants to be now that she’s finally grown up. Now more than ever, Bonnie depends on the support of her friends, including wise Marjorie (Kennedy), wealthy and sometimes misguided Jill (Pressly), overly emotional Wendy (Hall), and her foster sister, Tammy (Johnston), who was recently released from prison. Through it all, these women help each other overcome their mistakes and stay sober in the face of whatever life throws their way.

The eighth season of Mom averaged a 0.61 rating in the 18-49 demographic and 5.16 million viewers. Compared to season seven, that’s down by 23% in the demo and down by 18% in viewership. Find out how Mom stacks up against other CBS TV shows.

Will CBS cancel or renew Mom for season nine? This is the first season without Anna Faris. While the cast remains very capable, it’s unclear how the show will do without one of its two main characters. I suspect that the show will be renewed but, I could see Janney and company deciding to call it a day, too. I’ll update this page with breaking developments. Subscribe for free alerts on Mom cancellation or renewal news.

2/17/21 update: Mom is ending so there won’t be a ninth season for this CBS comedy series.

What do you think? Were you hoping that the Mom TV show would be renewed for a ninth season? Are you sorry that this CBS series is ending?

Yes! Mom should be renewed for another season! People hate it when tv shows don’t at least wrap things up with the characters. This was definitely a great show, with a talented cast! Bad decision!

Yes mom should definitely be renewed for or season 9!! That was one of my favorite shows & I never missed an episode! I was devastated when I heard it had been cancelled . Especially how season 8 ended.. I was looking forward to seeing how everything unfold especially Jill having a baby!! So please please please put it back on air!!

Mom should be renewed it’s the best show ever!!! It’s the only show i’ve been watching. I’m so disappointed that they canceled Mom. Please renew the show it’s one one the best on TV worth watching.

I love the show and love it even more now that the daughter is gone. All her whining was getting on my nerves. I hope it stays around for a long time.

Unless they can get back Faris, I don’t think Mom should have a 9th season. The 8th has been extremely disappointing thus far. The magic is no longer there.