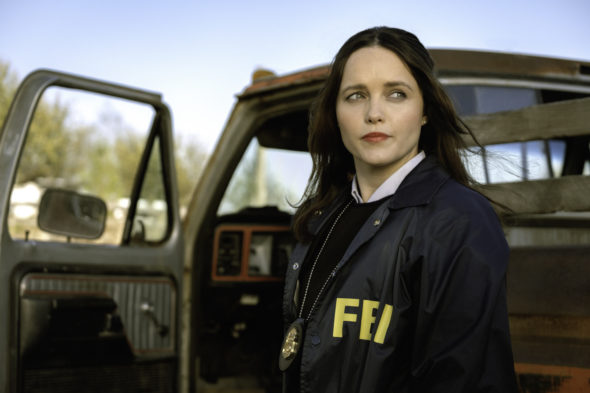 How dark will this show get? Has the Clarice TV show been cancelled or renewed for a second season on CBS? The television vulture is watching all the latest cancellation and renewal news, so this page is the place to track the status of Clarice, season two. Bookmark it, or subscribe for the latest updates. Remember, the television vulture is watching your shows. Are you?

Airing on the CBS television network, the Clarice TV show stars Rebecca Breeds, Michael Cudlitz, Lucca de Oliveira, Kal Penn, Nick Sandow, Devyn Tyler, and Marnee Carpenter. The series is a deep dive into the untold personal story of FBI Agent Clarice Starling (Breeds) as she returns to the field in 1993, one year after the hunt for serial killer Buffalo Bill (Simon Northwood). Brilliant and vulnerable, Clarice’s bravery gives her an inner light that draws monsters and madmen to her. However, her complex psychological makeup — which comes from a challenging childhood — empowers her to begin to find her voice while working in a man’s world. It also helps her begin to escape the family secrets that have haunted her throughout her life.

The first season of Clarice averaged a 0.32 rating in the 18-49 demographic and 2.76 million viewers. Find out how Clarice stacks up against other CBS TV shows.

Will CBS cancel or renew Clarice for season two? This show hasn’t broken through and delivers low ratings. I think there’s still a chance it will be renewed but a cancellation wouldn’t be surprising. I’ll update this page with breaking developments. Subscribe for free alerts on Clarice cancellation or renewal news.

Status Update: Clarice has been cancelled so, there won’t be a second season on CBS.

What do you think? Were you hoping that the Clarice TV show would be renewed for a second season? Are you sorry that CBS cancelled this TV series, instead?

Clarice was a fantastic show.

Really clever link into the film, brilliant acting from all

I loved this show! I wish it would come back. Loved the cast, the writing…everything was A one

Please make more seasons. The original story still has cult status world wide. This series is just a entre’ to what could be one of the best psycological thrillers this decade. So please, please make more.

We loved this show, and we are anxiously waiting for Season 2 to return somewhere, whether it be on TV or one of the streaming services. Please bring “Clarice,” Season 2 back!!!

Loved the show. It is so much better than other truly crappy shows that go on and on, and are not worth watching.

Would like to see it continue. Has good writers. Yes it is dark but so is realty, and other investigative shows.