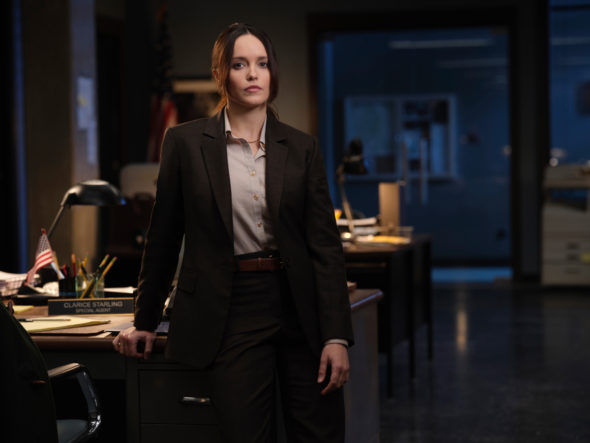 TV show description:
A psychological crime and horror series, the Clarice TV show was created by Alex Kurtzman and Jenny Lumet and is based on The Silence of the Lambs by Thomas Harris.

The series is a deep dive into the untold personal story of FBI Agent Clarice Starling (Breeds) as she returns to the field in 1993, one year after the hunt for serial killer Buffalo Bill (Simon Northwood) and her run-in with cannibalistic serial killer Dr. Hannibal Lecter.

Brilliant and vulnerable, Clarice’s bravery gives her an inner light that draws monsters and madmen to her. However, her complex psychological makeup — which comes from a challenging childhood — empowers her to begin to find her voice while working in a man’s world. It also helps her begin to escape the family secrets that have haunted her throughout her life.

Clarice works with Shaan Tripathi (Penn), an agent with a Ph.D. in library science with expertise in all things archival; Paul Krendler (Cudlitz), the leader of the Violent Criminal Apprehension Program (VICAP) Fly Team and a gifted investigator for the Department of Justice; Murray Clarke (Sandow) comes from a law enforcement family and is a little slow around the office but he’s one of your best friends in the field; Tomas Esquivel (de Oliveira) is a former counter-sniper during Operation Desert Storm and belies the FBI needs to move past its “old school” mentality; and Ardelia Mapp (Tyler), Clarice’s roommate at the FBI Academy who has landed at the Department of Justice where she is an Assistant U.S. Attorney.

Series Finale:
Episode #13 — Family is Freedom
On the heels of ViCAP uncovering Alastor’s secrets, Clarice is imprisoned in an animal testing facility where she finds trafficked women being held captive. ViCAP and Ardelia team up to locate Clarice as she attempts to break from her captors in a race to rescue the other women.
First aired: June 24, 2021.

What do you think? Do you like the Clarice TV show? Do you think it should have been cancelled or renewed for a second season?

I really enjoyed Clarice and feel that it should have been renewed. I will miss the show.