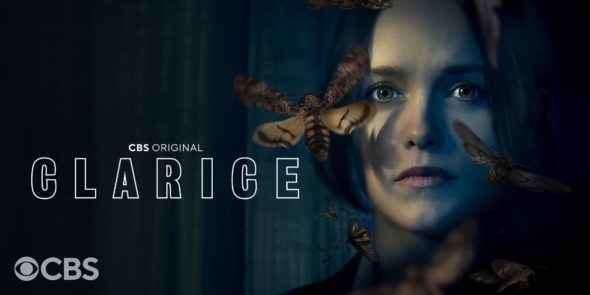 A new CBS series, Clarice is based on the character from The Silence of the Lambs. The last series based on that book/movie, Hannibal, has a devout following but lasted just three low-rated seasons. Will Clarice do as well or better? Will it be cancelled or renewed for season two? Stay tuned. *Status update below.

A psychological crime and horror series, the Clarice TV show stars Rebecca Breeds, Michael Cudlitz, Lucca de Oliveira, Kal Penn, Nick Sandow, Devyn Tyler, and Marnee Carpenter. The series is a deep dive into the untold personal story of FBI Agent Clarice Starling (Breeds) as she returns to the field in 1993, one year after the hunt for serial killer Buffalo Bill (Simon Northwood). Brilliant and vulnerable, Clarice’s bravery gives her an inner light that draws monsters and madmen to her. However, her complex psychological makeup — which comes from a challenging childhood — empowers her to begin to find her voice while working in a man’s world. It also helps her begin to escape the family secrets that have haunted her throughout her life.

6/25 update: You can see the latest night’s ratings in context.

What do you think? Do you like the Clarice TV series on CBS? Should it be cancelled or renewed for a second season?

*Status Update: Clarice has been cancelled so, there won’t be a second season on CBS.

Please do not Cancel Clarice

Please keep, one of the better shows !

I watch every week. Keep

I love this show. Please don’t cancel it. There are other garbage shows that should be canceled instead.

I love it. Had to watch it couple of times. I wanted not to miss anything.

I just started watching Clarice and want more of it.. I like it and cant get enough of it

I like the series. It’s a complex, psychological, mystery with interesting and very different types of characters. I’d like to see it renewed on CBS or picked up and expanded by Netflix, or HULU or the like.

Forget Netflix & Hulu as we would have to pay extra to watch on these. We are pensioners on a fixed income. Too many shows are moving from regular channels.

do all a favor and cancel the show

Im enjoying Clarice very much just like Prodical Son. There is nothing more enjoyable than a great mystery.