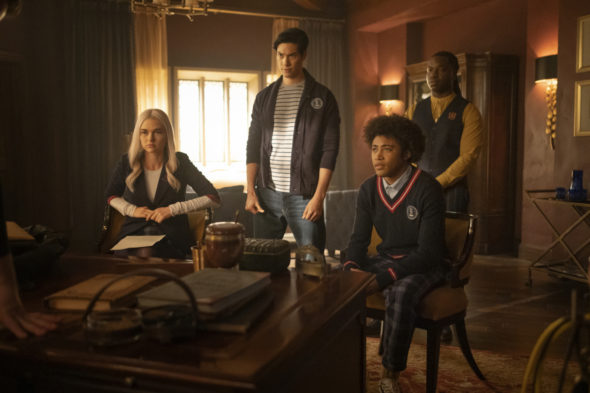 Can you win in a battle with fate? Has the Legacies TV show been cancelled or renewed for a fourth season on The CW? The television vulture is watching all the latest cancellation and renewal news, so this page is the place to track the status of Legacies, season four. Bookmark it, or subscribe for the latest updates. Remember, the television vulture is watching your shows. Are you?

Airing on the The CW television network, the Legacies TV show stars Danielle Rose Russell, Jenny Boyd, Kaylee Bryant, Quincy Fouse, Aria Shahghasemi, Peyton Alex Smith, Chris Lee, Leo Howard, Ben Levin, with Matthew Davis. A spin-off of The Originals (which is a spin-off of The Vampire Diaries), this show is set in the Salvatore Boarding School for the Young and Gifted in Mystic Falls, a haven for supernatural beings to learn to control their impulses and abilities. The ongoing story follows a new generation of supernatural students (like vampires, witches, and werewolves) as they learn what it means to be special in a society that wouldn’t understand their gifts. They include Hope (Russell), Lizzie (Boyd) Josie (Bryant), MG (Fouse), Rafael (Smith), Kaleb (Lee), and Landon (Shahghasemi). In season three, Hope has risked everything to pull her friends back from the brink of a monstrous prophecy that threatened to doom them all. But when a heartbreaking loss shatters her whole world, she’s forced to fight fate itself.

The third season of Legacies averaged a 0.12 rating in the 18-49 demographic and 544,000 viewers. Compared to season two, that’s down by 46% in the demo and down by 29% in viewership. Find out how Legacies stacks up against other The CW TV shows.

Will The CW cancel or renew Legacies for season four? The network has been renewing almost its entire slate each year. While this show won’t last forever, I suspect that it’s far from over. I believe Legacies will be renewed. I’ll update this page with breaking developments. Subscribe for free alerts on Legacies cancellation or renewal news.

2/3/21 update: Legacies has been renewed for a fourth season on The CW.

What do you think? Are you glad that the Legacies TV show has been renewed for a fourth season? How would you feel if The CW had cancelled this TV series, instead?