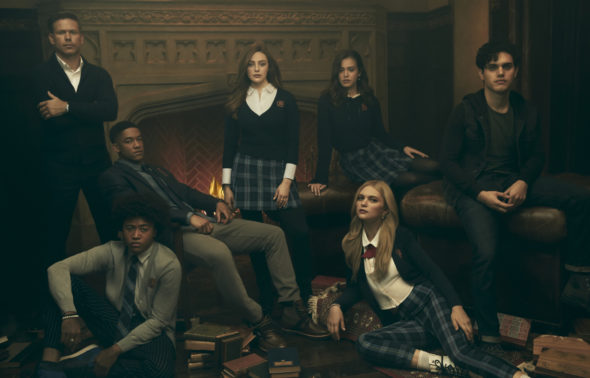 TV show description:
From creator Julie Plec, the Legacies TV show is a spin-off of The Vampire Diaries, which ended its eight-season run in 2017, and The Originals, which ended in 2018 after five seasons on The CW. This supernatural drama unfolds in Mystic Falls, Virginia.

The horror-fantasy centers on Hope Mikaelson (Russell), daughter of the Original, Klaus Mikaelson (Joseph Morgan). Hope is now a student at The Salvatore Boarding School for the Young and Gifted, along with Lizzie (Boyd) and Josie (Bryant), the twin daughters of Alaric Saltzman (Davis).

Other students at the school include Milton Gladstone, i.e. MG (Fouse), an energetic vampire; Rafael Waithe (Smith); a newly triggered werewolf; and the enigmatic Landon Kirby (Shahghasemi). Together, these unusual young adults find themselves coming of age in ways as unique as they are.

The boarding school aims to bring out the best in them, despite their beasts within. Only time will tell if these witches, vampires, and werewolves will develop into bona fide heroes or outright villains. Although they’re still in school, they have to keep their abilities and true natures a secret, while they rely on age-old lore to help them learn how to fight their enemies.

What do you think? Do you like the Legacies TV series? Should this CW TV show have been cancelled or renewed for a fifth season?

This series should not have been cancelled! So disappointing. I’ve watched all three series from TVD and The Originals and The Legacies – and enjoyed all three for their story lines and plots – yet stand alone with amazing acting from all their actors. Bring back Legacies season 5 please!!

They should not cancel it give us a season 5

Legacies should of been renewed for a fifth season! Especially when they renewed Kung-fu, which is why after Legacies and Riverdale are over I’m done watching @TheCW for good!

I have followed the Vampire Diaries to the Originals to Legacies. Each show has won me over again and again. I would hate to see this series stop. There is so much more. Involve families of the students, bring Caroline back, where’s Josie…..to much left undone. Please do not stop now!!!

I completely agree with you. Iv been a devoted vampire diaries, Originals and Legacies watcher from the beginning. Iv cried enough tears for a life time.
Legacies was canceled towards the end of the 4th season, so there is no way we gona get closer .We gona be dropped with a huge cliff hanger, anxiety and tears ‍♀️.
After so many years watching we all deserve an ending.