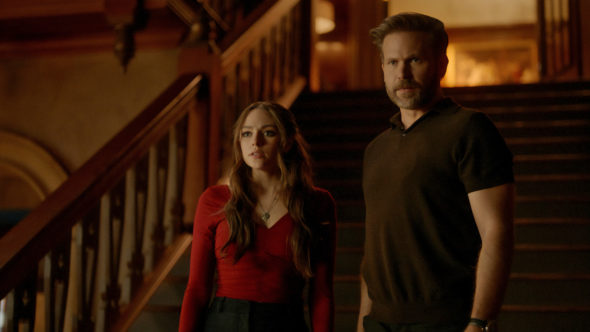 It’s the end of an era. The Legacies series has been cancelled and won’t have a fourth season. The series finale is expected to air on June 16th. That will close the book on The Vampire Diaries and The Originals universe on The CW after 13 years.

A supernatural drama, the Legacies TV show stars Danielle Rose Russell, Jenny Boyd, Kaylee Bryant, Quincy Fouse, Aria Shahghasemi, Chris Lee, Leo Howard, Ben Levin, and Matthew Davis. This show is set in the Salvatore Boarding School for the Young and Gifted in Mystic Falls, a haven for supernatural beings to learn to control their impulses and abilities. The ongoing story follows a new generation of supernatural students (like vampires, witches, and werewolves) as they learn what it means to be special in a society that wouldn’t understand their gifts. They include Hope Mikaelson (Russell), Lizzie Saltzman (Boyd), Josie Saltzman (Bryant), MG (Fouse), Kaleb (Lee), and Landon Kirby (Shahghasemi). Josie and Lizzie’s father is Alaric Saltzman (Davis), the human headmaster of the school.

Airing on Thursday nights, the fourth season of Legacies averages a 0.08 rating in the 18-49 demographic and 361,000 viewers. Compared to season three, that’s down by 36% in the demo and down by 34% in viewership in the live+same day ratings (including DVR playback through 3:00 AM). In the live+7 day ratings, which includes a week of delayed viewing, the season currently averages a 0.20 demo and 757,000 viewers.

What do you think? Have you kept up with the Legacies TV show on The CW? Are you disappointed that there won’t be a season five?

I CANNOT believe they are canceling Legacies or Charmed just when Hope is herself again and the good Hope and gets the chance to be with Landon, and Lizzie and MG could get together, and Kalebs back story.
And on charmed we’re just learning about kaelas new powers and her past, and Harry and Jordan’s new powers it’s a shame. I don’t care if you do sale the ppl that buy it should renew both shows. I’m not happy at all very upset I love watching those shows!

I cannot believe they’re cancelling another good show and it’s in a trilogy series!! What is wrong with these stations?! I truly hope somebody picks it up like Netflix or AMC or somebody.

So do I bc I’m very ticked off that their canceling it after everything that’s happened it just starts to get even better with God’s and back stories and they cancel. What a joke!

Have watched it every week. Very disappointed

I can’t believe this got canceled legacies is my favorite show. I have been watching since the Vampire Diaries all the way through the Originals and finally to this. Way to go another stupid decision let’s just cancel all the good shows and leave the awful ones.

Frfr! I watched TVD then Originals, then, Legacies! I’ve watched them religiously never missed a show I even re watch them on the CW app and Netflix. But I’m with you just end all the great shows and keep the stupid ones that no one cares about that actually suck! I hope TNT can and will pick them up bc the OG Charmed and Supernatural started on cw then TNT picked them up hopefully they’ll do the same for Legacies and Charmed too. Bc I’m very upset about this!

WTH…I’ve lost count of the amount of shows I watch that CW have recently cancelled…not Impressed to say the leas!!

Not ready to let go of such a heart felt show that brought tears to my eyes and great happiness at times. Not fair to take it away from people that love this show… sad to see it go.

I rather liked this but perhaps it required more of an expansion of characters.

Might as well put a stake in CW itself. The entire network is committing corporate suicide lately.

And if Mitt Romney was correct that “corporations are people, my friends”…. then I guess CW will soon be located in Hell.