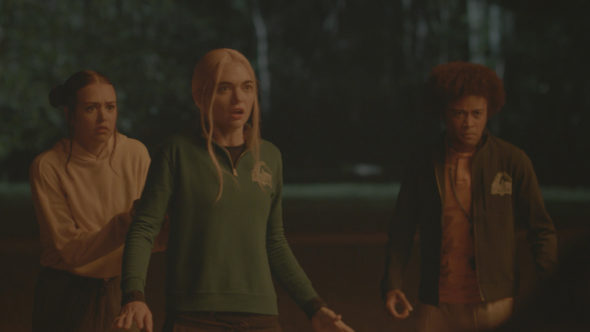 The Salvatore Boarding School for the Young and Gifted will stay open for the 2021-22 television season. The CW has renewed the Legacies TV show for a fourth year.

The Legacies TV show stars Danielle Rose Russell, Jenny Boyd, Kaylee Bryant, Quincy Fouse, Aria Shahghasemi, Peyton Alex Smith, Chris Lee, Leo Howard, Ben Levin, with Matthew Davis. A spin-off of The Originals (which is a spin-off of The Vampire Diaries), this show is set in the Salvatore Boarding School for the Young and Gifted in Mystic Falls, a haven for supernatural beings to learn to control their impulses and abilities. The ongoing story follows a new generation of supernatural students (like vampires, witches, and werewolves) as they learn what it means to be special in a society that wouldn’t understand their gifts. They include Hope (Russell), Lizzie (Boyd) Josie (Bryant), MG (Fouse), Rafael (Smith), Kaleb (Lee), and Landon (Shahghasemi). In season three, Hope has risked everything to pull her friends back from the brink of a monstrous prophecy that threatened to doom them all. But when a heartbreaking loss shatters her whole world, she’s forced to fight fate itself.

The third season of Legacies averages a 0.17 rating in the 18-49 demographic and 700,000 viewers. Compared to season two, that’s down by 26% in the demo and down by 8% in viewership. As live+same day ratings keep dropping for most network shows, The CW continues to focus on streaming and other revenue sources.

What do you think? Do you like the Legacies TV show on The CW? Are you glad that the series has been renewed for a fourth season?

I really enjoy this show and have followed the story from the originals. I agree with previous comments that Hope has to move on from Landon. Now that she is a tribread so many stories could be made of that. Please keep this show.

Yes my husband and I have followed the whole series from Vampire Diaries to Legacies. I have to admit the Orinals were our favorite series but still happy this is continuing!

I love Legacies! I’m so happy to see a season 4 coming!I wish Claus would appear for Hope, that would be awesome! My whole family watches it and we all started watching Vampire Diaries and Orginals.

I love that Legacies is renewed. Been watching it since day 1. Just finding Landon character a bit boring.

Yes I love Legacies & hope it gets renewed for many more seasons!

Firstly, I love this show but I have to be honest. The show has taken a nose dive making Landon the main focus and doing all this stuff with malivore. I think Landon should stay dead for the seasons to come and he should rarely be seen in the show. We want to see more of Hope and her abilities and have her move on from Landon. For a whole season we sat and watched Hope be all about Landon and nothing else. It’s boring. We want wolf action, vamp action and witch action. She is a triad after all.… Read more »

I’m happy it’s renewed! Unlike some of the TVDU fandom, I do consider this show a gem and that various of the flaws of the previous two shows have been improved upon with this show!