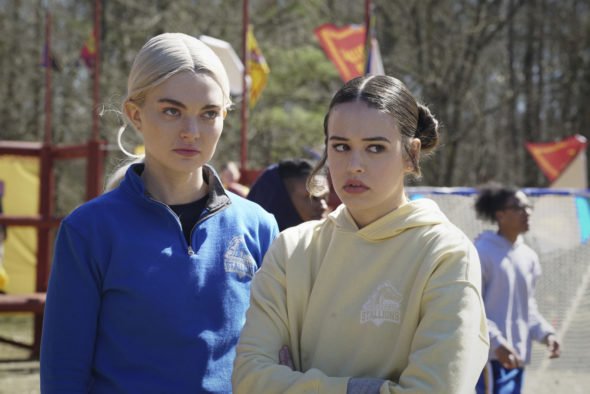 Will Hope and her friends all survive in the third season of the Legacies TV show on The CW? As we all know, the Nielsen ratings typically play a big role in determining whether a TV show like Legacies is cancelled or renewed for season four. Unfortunately, most of us do not live in Nielsen households. Because many viewers feel frustration when their viewing habits and opinions aren’t considered, we invite you to rate all of the third season episodes of Legacies here. *Status Update Below.

A CW supernatural series, the Legacies TV show stars Danielle Rose Russell, Jenny Boyd, Kaylee Bryant, Quincy Fouse, Aria Shahghasemi, Peyton Alex Smith, Chris Lee, Leo Howard, Ben Levin, with Matthew Davis. A spin-off of The Originals (which is a spin-off of The Vampire Diaries), this show is set in the Salvatore Boarding School for the Young and Gifted in Mystic Falls, a haven for supernatural beings to learn to control their impulses and abilities. The ongoing story follows a new generation of supernatural students (like vampires, witches, and werewolves) as they learn what it means to be special in a society that wouldn’t understand their gifts. They include Hope (Russell), Lizzie (Boyd) Josie (Bryant), MG (Fouse), Rafael (Smith), Kaleb (Lee), and Landon (Shahghasemi). In season three, Hope has risked everything to pull her friends back from the brink of a monstrous prophecy that threatened to doom them all. But when a heartbreaking loss shatters her whole world, she’s forced to fight fate itself.

What do you think? Which season three episodes of the Legacies TV series do you rate as wonderful, terrible, or somewhere between? Do you think that Legacies should be cancelled or renewed for a fourth season on The CW? Don’t forget to vote, and share your thoughts, below.

*2/3/21 update: Legacies has been renewed for a fourth season on The CW.

Unless they can bring some more tvd/ the originals to this show.. kill it! It is so boring!! And makes very little sense! I am a true fan of tvd and the originals and have been patiently waiting for Legacies to get better. And now 2 episodes into season 3.. I am not even going to bother watching anymore.