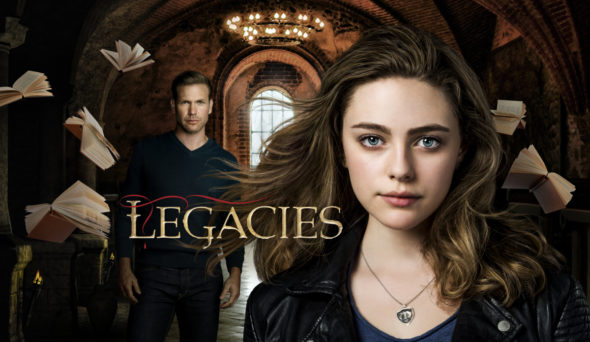 How is life in Mystic Falls during the first season of the Legacies TV show on The CW? As we all know, the Nielsen ratings typically play a big role in determining whether a TV show like Legacies is cancelled or renewed for season two. Unfortunately, most of us do not live in Nielsen households. Because many viewers feel frustration when their viewing habits and opinions aren’t considered, we’d like to offer you the chance to rate all of the season one episodes of Legacies below.

A CW supernatural drama, Legacies is a sequel series to The Vampire Diaries and The Originals, starring Danielle Rose Russell, Jenny Boyd, Kaylee Bryant, Quincy Fouse, Aria Shahghasemi, Peyton Alex Smith, and Matt Davis. The horror fantasy centers on Hope Mikaelson (Russell), daughter of the Original, Klaus Mikaelson (Joseph Morgan). Hope is now a student at The Salvatore Boarding School for the Young and Gifted, along with other unusual students, including Lizzie (Boyd) and Josie (Bryant), the twin daughters of Alaric Saltzman (Davis). Although they’re still in school, they have to keep their abilities and true natures a secret, while they rely on age-old lore to help them learn how to fight their enemies.

What do you think? Which season one episodes of the Legacies TV series do you rate as wonderful, terrible, or somewhere between? Should The CW cancel or renew Legacies for a second season? Don’t forget to vote, and share your thoughts, below.

If I had to rate legacy I’ll give it a 3 it honestly should have stopped
and left it at originals.

You need to bring back Star Crossed and The 100, ugh. You cancel all the best shows!!!

I love legacies! I’m on edge over last season’s finale though. I’m not sure how I’ll feel if Hope doesn’t come out of the pit! So I’m keeping my finger’s crossed.

Legacies Another Great CW Series Like this series Great Grp Actors work well Show sure offer a Wide Range what goes bump in the nite Best Part Not too Fake as some films just over do it . Can See This Series Being in my Dvd Collection 4 Many Years After