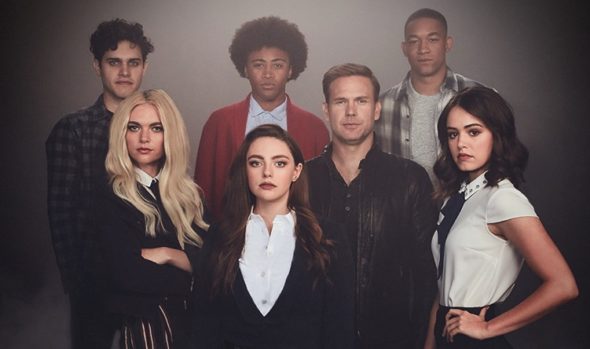 Will viewers give this series good grades? Has the Legacies TV show been cancelled or renewed for a third season on The CW? The television vulture is watching all the latest cancellation and renewal news, so this page is the place to track the status of Legacies, season three. Bookmark it, or subscribe for the latest updates. Remember, the television vulture is watching your shows. Are you?

Airing on The CW television network, the Legacies TV show stars Danielle Rose Russell, Jenny Boyd, Kaylee Bryant, Quincy Fouse, Aria Shahghasemi, Peyton Alex Smith, with Matt Davis. A spin-off of The Originals (which is a spin-off of The Vampire Diaries), this show is set in the Salvatore Boarding School for the Young and Gifted in Mystic Falls, a haven for supernatural beings to learn to control their impulses and abilities. Typically a school for vampires like MG (Fouse), werewolves like Rafael (Smith) and witches like twins Lizzie (Boyd) and Josie (Kaylee Bryant), the kids and their beloved headmaster Dr. Alaric Saltzman (Davis) were stunned to come face to face with a series of monster and creatures they had only ever heard of in myth and lore — a dragon, a gargoyle, and the Headless Horseman. The evil behind the real-life resurrection of these formerly fictional beings proved to have a horrifying connection to the school’s newest student, Landon (Shahghasemi). This led his first and only love, Hope (Russell), the school’s shining star, to sacrifice her place at the school — and in the world — to protect Landon from a terrible fate. In season two, Hope tries to find her way back to the school she has learned to call home and the friends she has learned to love like family.

The second season of Legacies averaged a 0.24 rating in the 18-49 demographic and 762,000 viewers. Compared to season one, that’s down by 24% and 24%, respectively. Find out how Legacies stacks up against other The CW TV shows.

Will The CW cancel or renew Legacies for season three? The ratings are okay and the show is a good fit for the network’s audience so, I think it will be renewed. I’ll keep an eye on the ratings and update this page with breaking developments. Subscribe for free alerts on Legacies cancellation or renewal news.

1/7/20 update: The CW has renewed Legacies for a third season.

What do you think? Are you glad that the Legacies TV show has been renewed for a third season? How would you feel if The CW had cancelled this TV series, instead?

I am very glad there is a season 3 , I am very excited for the show and would like to see it run for a long while. I will be very upset if I were to be canceled, also would love to see Stephanie Salvatore appear as well as Caroline Forbes.

I am very glad that there will be a season 3. I think the writing is well done and the plots interesting. In my opinion, this was one of the most creative science fiction/fantasy shows to come along in quite a while.

I LOVE TVD!! Followed The Originals and went on to Legacies. Looking forward to seeing cast members from TVD in Legacies. I did not care for the gargoyle, spider or the Beetlejuice looking demon “characters”. But enjoyed the rest. I hope we all get to see the 3rd season. Wish we had gotten to see more of Elena and Damon before TVD ended. Like their wedding and them having children and growing old. What we got felt a bit rushed to end the show. But it was done nicely enough that it gave us closure with the end of a… Read more »

Legacies should be continued, but has been given a fits and starts chance in season2. Hope for more.