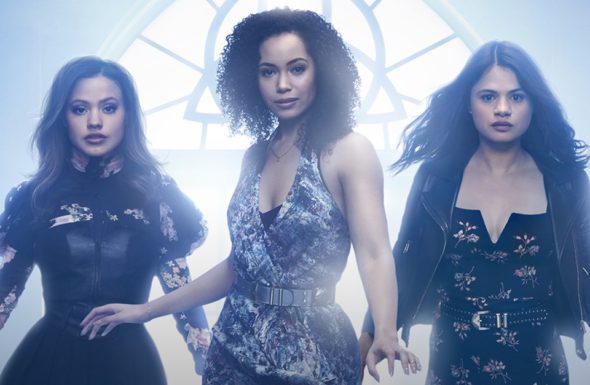 Can the sisters conjure Nielsen ratings magic? Has the Charmed TV show been cancelled or renewed for a third season on The CW? The television vulture is watching all the latest cancellation and renewal news, so this page is the place to track the status of Charmed, season three. Bookmark it, or subscribe for the latest updates. Remember, the television vulture is watching your shows. Are you?

The second season of Charmed is averaging a 0.17 rating in the 18-49 demographic and 638,000 viewers. Compared to season one, that’s down by 34% and 25%, respectively. Find out how Charmed stacks up against other The CW TV shows.

Will The CW cancel or renew Charmed for season three? The ratings aren’t great but I suspect this show will still be renewed. I’ll keep an eye on the ratings and update this page with breaking developments. Subscribe for free alerts on Charmed cancellation or renewal news.

1/7/20 update: The CW has renewed the Charmed TV show for a third season.

What do you think? Are you glad that the Charmed TV show has been renewed for a third season? How would you feel if The CW had cancelled this TV series, instead?

On the reboot they do mention on the book of elders that they are not the first charmed one’s so that should make you happy!

Nobody cares about Charmed Reboot! Just cancel it!

Nobody cares about the old actresses anymore. If you are true fan that you should love both shows. Nobody is stealing the og away the reboot is the new generation of the today’s world. I love the 90’s but it’s in the past now!

I love the show. Even better second time around watching on Netflix. First run i compared it to the origins.. second time, not so much. So excited for season 3

Yes season 1 was similar to the og and season 2 is different and season 3 is which is good.

There is only ONE Charmed and this isn’t it! This show isn’t related and shouldn’t have stolen the name. The best route they could have taken would have been to just call it something else. Sad it’s gone on this long dragging a great name down, little less a third season.

It is related because they need to talk about the history why else show Melinda Warren in the book of shadows. The could be cousins to the halliwells sisters? It mention on the book of elders they are not the first charmed one’s so that should make you happy!

I didn’t understand how you ended the first Charmed the way you did, and didn’t bring my boys Wyatt and Chris into the show….Charmed is heart felt show for people of a family origin, but needless to say that this Charmed was even more exciting after the first few episodes…And ended pretty cool, for an awesome come back….Should leave the Harry and Macy affair alone they are perfect together!!!…

I absolutely love the show and it is sooo good. I don’t get why people hate it. I love it and I am so happy that it is coming for a third seasoning. Yay!! The actors are great as well; don’t understand why people are trashing the show so much. But in my opinion the show’s great!

I couldn’t watch past the the introduction. A reboot should continue from the original story line not start it over. The character’s should include at least an original character to continue the story line, even if played by a different actor at least the pickup would have made a better start. Why not pick up with Wyatt and or Chris? I tried to watch to see where the continuance would lead instead I got a lot of politically correct redo that made zero sense and insulted the original. I would have watched it no matter the character’s sexual preference I’m… Read more »

Everyone needs to get over the original as great as it was, watching every episode over and over again, it’s refreshing to watch 3 new gorgeous witches on a new journey.. time to let go and move on. The new CHARMED has potential to be just as good with new ideas..

Thank you I agree to. I hated it at first and after I loved it. People need to get over it.

Show should have never started. Really bad story and bad actors. Better to cancel the show, because the ratings will only drop lower.

There was no reason to steal the name “Charmed” and simply put in a little magic into a typical Hispanic soap opera. There are already a million of those. I think this show would actually do better if they did it in Spanish.

It is you are right there is gonna be more now

This show fell flat from the beginning. I gave it the first season to be anything but a knockoff but it never rose to what it should’ve been.