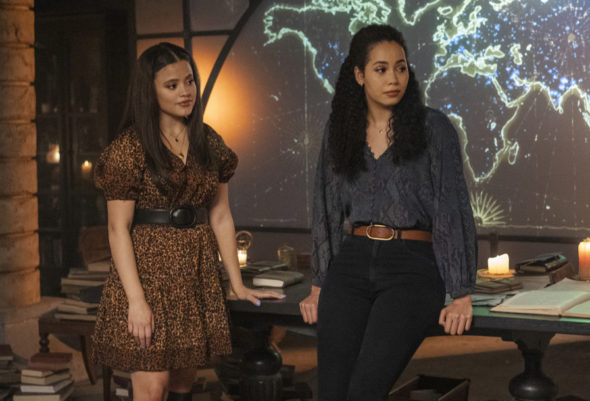 Will the sisters prevail in the third season of the Charmed TV show on The CW? As we all know, the Nielsen ratings typically play a big role in determining whether a TV show like Charmed is cancelled or renewed for season four. Unfortunately, most of us do not live in Nielsen households. Because many viewers feel frustration when their viewing habits and opinions aren’t considered, we invite you to rate all of the third season episodes of Charmed here. *Status Update Below.

What do you think? Which season three episodes of the Charmed TV series do you rate as wonderful, terrible, or somewhere between? Do you think that Charmed should be cancelled or renewed for a fourth season on The CW? Don’t forget to vote, and share your thoughts, below.

*2/3/21 update: Charmed has been renewed for a fourth season on The CW.

The the old charmed was and is way better!!!!Super bored with this one.Thier is zero sexy!!!

I think this past show on june the 11 2021 so far was one of the best hands down i love were the writers are going and on top of it all the twist about mel and her new babyi think people should stop looking at tbe new cast thinking there are the old now granted. The old charmed milano doherty and combs were the best three season i have ever seemn on tv. I think that jefferies mantock and diaz should go some were for the summer break and do nothing but really get to know each other then… Read more »

Only a half dozen shows that I watch every week and this is near the top.of the list.

I love this show! In the beginning I was very skeptical of it because I loved the original one so much but when I finally gave it a chance (which was last month 2021) I really enjoyed it! Started watching it on Netflix last month and I’m caught up now on Season 3 on CW. All three ladies are so pretty and great actresses! Please don’t take it way and everyone give it a fair chance check it out…you can see the first two seasons on Netflix. I’m definitely hoping for a 4th season!

The thing is, no one cares about this pathetic show.
I’m generally shocked that it wasn’t cancelled after the first season.

Never watch this… so who cares?

So why are you commenting on it?

I love the show. Hope it will go on!!

I hoping for a season 4 I really love the show it’s so fun to watch.

I agree it’s stupid why come on late at 9pm when people going to sleep. Better to have it on 8pm and get rid of that batwoman show. Charmed is a better show and don’t want it be cancelled it’s not fair. It almost feels like it been set up to have less ratings. I’m already pissed that the show dropped from 25 to 18 episodes for season 3 like come on already it’s unfair to the fans.

Really? Lol. Other shows and sports are not to blame that your unwanted show is almost never watched. This reboot is a lame show, and most reasonable people understand that.
If you like it, then watch it, but there is no need to force people who have long abandoned it and switched to what they like. It’s a free country.