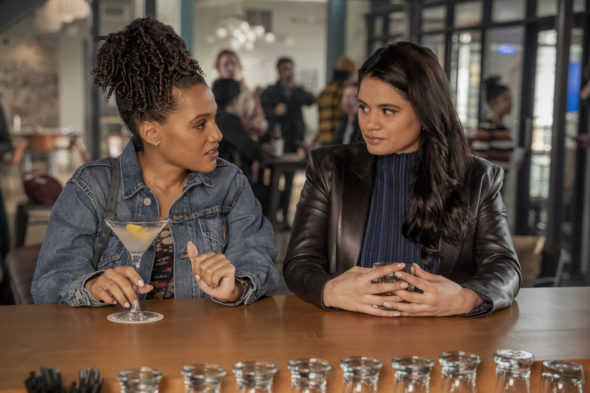 Is the magic still here? Has the Charmed TV show been cancelled or renewed for a fourth season on The CW? The television vulture is watching all the latest cancellation and renewal news, so this page is the place to track the status of Charmed, season four. Bookmark it, or subscribe for the latest updates. Remember, the television vulture is watching your shows. Are you?

Airing on The CW television network, the Charmed TV show stars Melonie Diaz, Madeleine Mantock, Sarah Jeffery, Rupert Evans, Poppy Drayton, and Jordan Donica. A reboot of the 1998 series, the show follows three sisters (Diaz, Jeffery, and Mantock) who discover they are witches in the wake of their mother’s murder. Soon, this powerful threesome must stand together to harness “The Power of Three” and protect humanity from the demons that prowl the earth. In season three, the “Charmed Ones” and their whitelighter, Harry (Evans), continue their battle with The Faction — a cabal of humans trying to steal magic for themselves.

The third season of Charmed averaged a 0.09 rating in the 18-49 demographic and 379,000 viewers. Compared to season two, that’s down by 49% in the demo and down by 41% in viewership. Find out how Charmed stacks up against other CW TV shows.

Will The CW cancel or renew Charmed for season four? This show hasn’t been a great performer in the traditional ratings but the network depends on them less than others because of the many ways its shows are monetized. In addition, The CW has been renewing almost all of its established scripted shows each year. The series will end someday but, I am confident that Charmed will be renewed for a fourth year. I’ll update this page with breaking developments. Subscribe for free alerts on Charmed cancellation or renewal news.

2/3/21 update: Charmed has been renewed for a fourth season on The CW.

What do you think? Are you glad that the Charmed TV show has been renewed for a fourth season? How would you feel if The CW had cancelled this TV series, instead?

Love this version of Charmed!!! Im 68 yrs old so I don’t fit in the normal age group but I don’t care!!! It’s awesome and I’ll keep watching!!

The CW is like a long burned out star somewhere in the distant corner of our Universe. In reality it is a cold, dead thing that floats through space; though to us on Earth it still ugly shines light that leaves marks in your eyes if you look right at it.

Well, this weak reboot is justifiably in a position that it’d rather not be in XD

This mediocre show should have been canceled after the first season. I am shocked that this abomination is still being prolonged. What’s wrong with you, the CW?